Do you think Jarrett Barrios, the disgraced former head of the Gay and Lesbian Alliance Against Defamation, keeps a PAC active in Massachusetts because just maybe his nonprofit career is not going to work out and this Democratic Party hack may want to run for dog-catcher of Jamaica Plain one day?

While the resignation of Barrios from GLAAD is a teensy step in the right direction at a smidgen of accountability at this worthless awards-happy group, the entire corrupt organization needs to dissolve themselves.

It is beyond reform, and even if I made my usual demand that they open their board meetings, hold town hall meetings, and other respectfully engage the community by _finally_ developing democratic principles, and the demands were met we would all know GLAAD was merely going through the motions of transparency.

Let's put GLAAD out of business and then look at all Gay Inc groups that are run by the same failed approach of  closed-door, horse-trading among friends with zero community input or direction at the Human Rights Campaign, National Gay and Lesbian Task Force, Gay and Lesbian Chamber of Commerce, Stonewall Democrats, and Victory Fund.

Nothing less than the total end of GLAAD is needed. Until that end arrives, let's look at every scrap of public info out there on Barrios and the GLAAD board.

There screen grabs of mine come from the Massachusetts Office of Campaign and Political Finance. Click to enlarge and view in crispness: 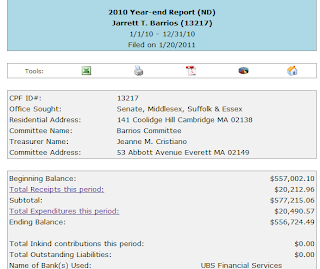 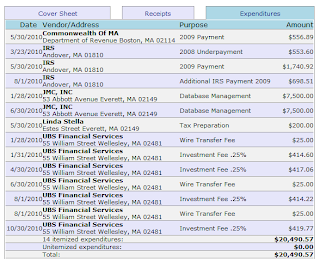 Posted by Unknown at 11:28 PM
Email ThisBlogThis!Share to TwitterShare to FacebookShare to Pinterest

You missed the best part Michael! JMC Inc. = Jeanne M. Cristiano, Barrios' special assistant at GLAAD who has followed him from job to job. Cristiano sent the letter of support for the AT&T merger to the FCC. Why would the President of a nonprofit need to pay his advisor $15,000/year out of his campaign coffers? [The address for the company is 53 Abbott Avenue Everett, MA. Property records from the Town of Everett show that 53 Abbot Avenue is owned, indeed, by Jeanne M. Cristiano and John G. Cristiano, a property they bought in April 2000. Campaign's 2009 Finance report, the year Barrios started at GLAAD, confirms this]

thanks for doing more digging than i and discovering that info! there can never be too many eyes looking at campaign finance reports.