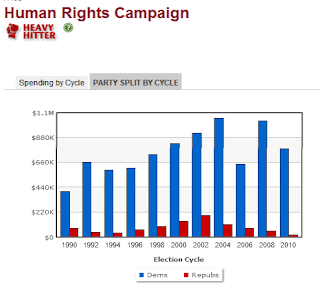 Among the dozens of faults with the Human Rights Campaign is their charade of being a bipartisan group, when everyone in Washington knows its actually thisclose to the Democratic National Committee and a key player on that party's plantation.

The chart above is from Open Secrets and illustrates the HRC PAC's giving by party. Look at the tall blue bars and try and convince yourself this is a bipartisan organization. We all know it's difficult to find gay friendly GOP politicians and PACs to support, and who wants any gay group throwing money at Republicans who don't like us or our political agenda. Fair enough, right?

Given that the bipartisan pretense of HRC has not produced fundamental and lasting legislation and changes for the gay, bisexual, lesbian and transgender communities, and none are project for the next 18-19 months as HRC gears up to be the gay arm of the reelect Obama effort, I'd like to make a simple suggestion.

Have HRC once and for all come out of the Democratic Party closet and openly work as the gay division of the DNC. Think of the advantages. HRC would show some genuine political smarts for once, bring themselves closer to the Democratic elite, please their one-million members (only 69 of whom are LGBT Republicans), and be offered hours of face-time on dozens of cable news shows, explaining their exit from Democratic national closet.

Frankly, I see not a single drawback to this idea.
Posted by Unknown at 6:21 PM
Email ThisBlogThis!Share to TwitterShare to FacebookShare to Pinterest

HRC is bullshit. Nobody donates to them anymore who is an LGBT person with with a brain. They are nothing more than lip-service to LGBT causes as, as you say, an arm of the DNC. It's all about getting in the right parties in DC. I'm a staunch Democrat, but an even stauncher LGBT rights advocate. And I call foul on HRC's bullshit on scraping millions of dollars from the LGBT community every year and having little to show for it other than VERY high executive salaries! I do OK, but I don't make that much. And I'm sure as hell not donating some of what I earn to those who earn more at a non-profit, especially such a show-y, non-transparent, and just so god-damned INEFFECTIVE a one as HRC! LGBTs would be better off donating to individual gay candidates and doing grass-roots MAJOR activism and civil disobedience. Have throngs of LGBT citizens close down the Beltway some morning in protest; that might get things moving in Washington beyond the DNC, HRC, and Obama administration lip-service to our "politically expendable" community who doesn't even, on the whole, vote.