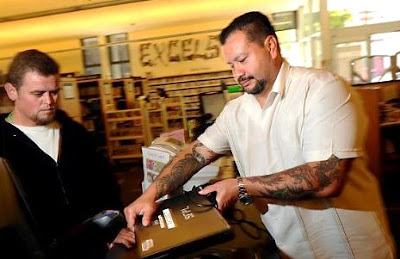 Say the word librarian, and I automatically picture Mrs. Plotkin, one of the great librarians at the West Caldwell, New Jersey, public library when I was growing up in the 1960s. She was so friendly, always helped me find the books and magazines I wanted to borrow, her hair had a blue rinse hue and she wore a time-piece on the left side of her blouses.

That mental image has to be updated, now that I've had a look at Octavio Ruiz, a librarian at the local Excelsior branch in San Francisco. He was featured in a recent SF Chronicle story about the evolving services at the public library, and the paper ran the color photo above of him helping a patron.

Can we say beefy, woofy tattooed bear whose sizable biceps are barely contained by the tight fabric of his shirt? Yes we can!

Count me as one citizen who has always supported public libraries and the many fine men and women who work there. I'm so old-fashioned about such things, I still borrow books from the library and wish I had reason to borrow one from the Excelsior branch, I could check out both Octavio Ruiz and the book.