(Straight Guy Based in Scotland, Vacationing in Turkey: Tom MacMaster. Credit: AFP.)
That Tom MacMaster, the heterosexual American male behind the Gay Girl in Damascus hoax, is quite an arrogant cretin. He spoke with the Brazilian Veja site yesterday and had plenty to say, including this astonishing comment, translated by the Harry's Place blog, bolding mine:

“But it’s wrong of people to condemn me for creating and portraying a homosexual heroine. It was necessary that this story should be told. There have also been some positive responses, people who think that, although my character was fictional, I was very courageous to write such things and go into such profound reflections. Many people would not have the courage to do this. I am like a messiah for the lesbians of Syria.”

While I am not a Syrian lesbian, have never been to Syria and as far as I know haven't met any Syrian lesbians, I believe the lesbians, heck, straight people too, in Damascus would strongly take issue with MacMaster's hubris.

Out of morbid curiosity, I tried to check out MacMaster's phony blog for the non-existent Amina Arraf, only to discover it's now been restricted to readers invited by MacMaster, as if this is going to solve any of the hoaxer's many continuing problems. The screen grab illustrates the latest twist in this sordid tale.

This act of restriction, removal really, reminds me very much of gay Russian Nikolai Alekseev's deletion of his blog, after he was accused of posting anti-Semitic statements. He eventually restored his blog to the web for all to read, but tremendous damage was done to his reputation.

By the way, MacMaster's wife Britta Froelicher comes across in media interviews as equally arrogant and clueless as her husband. A few days ago, when MacMaster finally admitted he was behind the hoax, National Public Radio reporters Eyder Peralta and Andy Carvin communicated via email with them and Britta had this to say about the many folks demanding answers and accountability from them:

"We are on vacation in Turkey," she wrote, "and just really want to have a nice time and not deal with all this craziness at the moment."

Irem Koker, a reporter with the daily Turkish Hurriyet paper, interviewed MacMaster and Froelicher on their nice vacation, and the paper's site included a few pix including this one: 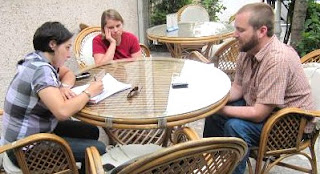 (Left to right: Koker, Froelicher and MacMaster. Credit: Cengiz Ozbek.)
As Syria's people contend with their government's bloody repression, thousands have lost their lives, with refugees flooding into Turkey and no end to the misery for Syrians who are supposedly of great concern to MacMaster and Froelicher, they are enjoying themselves on holiday. What rotten characters.
Posted by Unknown at 1:29 PM
Email ThisBlogThis!Share to TwitterShare to FacebookShare to Pinterest

Hi Michael,
I may have done many things wrong but that quote from the Brazilian paper is FAKE. Really. I'd suggest removing it. Pillory me for real things but not for things I have never said.
(There's a guy who has posed as me and has put videos of himself on youtube doing press interviews as me if you doubt this)

and how do i verify it's really you the hoaxer, or someone else? lemme tell you, it's not you 'may' have done lots of wrong, you and your wife britta definitely did much wrong and harm.

it's a good laugh to think you're upset about something supposedly fake about you! if someone is impersonating you on YT and in media interviews, it's a small amount of justice for your stupidity. haha.