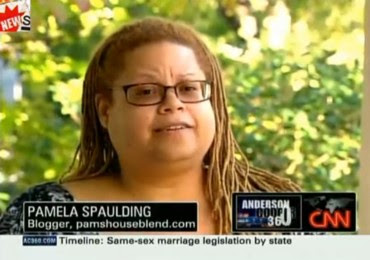 [Part 2 of an essay about bloggers, GLAAD and Gay Inc. The first part is here.]

With the Gay & Lesbian Alliance Against Defamation self-destructing in recent weeks, I was concerned with the lack of calls by prominent bloggers for structural changes at the group. After bemoaning the latest woes afflicting GLAAD, many bloggers said a few personnel changes - Jarrett Barrios and Troup Coronado must go - would be enough to solve the problem at the organization.

I reached out to Pam Spaulding, a lesbian blogger in North Carolina, and Karen Ocamb, another lesbian writer based in Los Angeles, asking them a few questions regarding their views on asking GLAAD to get with the transparency and democratic engagement agenda.

Since I had not read much at their sites, Pam's House Blend and LGBT POV, regarding the profound absence of democracy at GLAAD and related matters. Pam took the time to reply, but Karen has not. Here's Pam's comment:

No conspiracy to avoid mentioning town halls or more democratization within the groups at all. I just focused on the problems that inevitably plague groups like this. I have been on the road and not really writing much about it at all; the only reason I posted something is that I was quoted as calling for Jarrett's resignation, though I had not posted anything on my blog (I gave permission to use my quote from an email).

That said, I think your suggestions about transparency are merited. The problem here is, at best the lack of board engagement on issues that can compromise the integrity of an organization, and two, the laziness of leadership to take communications like this AT&T letter seriously. Being asleep at the wheel is a terrible problem.

Major changes need to be made, particularly regarding boards, if they are there for prestige and access and not there to work as a board, they need to be much more open and accountable to community leaders -- open town halls are a good idea, and not just at GLAAD. The fact is that they cannot represent the LGBT community if they are in a closed bubble.
Her endorsement of town hall meetings is most welcomed, and comes on the heels of a protest staged by grassroots activists this week against the NYC community center and its board for refusing to get with the transparency and accountability agenda, and to open their board sessions to community scrutiny.

I asked Pam some follow up questions pertaining to her talk earlier this year at the Outgiving conference and its lack of openness, the Haas Fund's weekend spring junket in San Francisco co-organized by the head of Bilerico.com that was invitation-only, being nominated for a GLAAD award, oh, and how she views her role as a watchdog. She replied:

The reason why I didn't call for more transparency at Gill is because I already had discussed with Bobby Clark to open up the Outgiving web site to include all of the programming at this year's conference, which they have. That, given the reticence of donors to be "exposed' in any form was a big step toward more transparency. That's certainly more than HRC (though that's a low bar). It's a good start re: Gill.
Re: Jarrett, I was clearly one of the few to publicly call for him to step down right away; I have no problem calling people I know out for abdicating their professional duties. What he did was wrong, and it thankfully opened the door to expand the investigation of other orgs and how they handled AT&T. It's not OK that Jarrett take the whole fall for this. I've blogged that this is about institutional rot and laziness; more heads need to roll and board members who are this unengaged need to step aside.

I think I was invited to Haas, but it was an offhand invitation from Bil Browning that didn't disclose any level of exclusivity at the time. I couldn't attend (I was recovering from surgery) and didn't even  remember anything about the invite until it became an issue down the road.


The GLAAD awards, as I explained to you, was something I didn't even request to participate in. They came to me as the deadline ended and I never filled out anything; they did it. Like any other award, I didn't give it much credence (awards are all relative anyway). The fact that GLAAD wasn't even willing to feed any nominee that would have traveled to NY to receive it was laughable. I doubt any of the stars they fete had to go find a sandwich. Joe will have to answer as to why he still has the award. But really, it's his choice whether returning it is any more meaningful as a protest. I haven't checked JMG to see his reaction to the whole flap.
In any case, my influence is only as good as my ability to give the time to writing, and between Righthaven and figuring out what to do, if anything about PHB (now moving to FireDogLake) and the demands of my day job, I certainly cannot carry the weight of the watchdog movement on my shoulders at this time.

She has a valid point about watchdogging. It's going to take dozens of bloggers and reporters, along with hundreds of activists and ordinary gays, demanding genuine democratic engagement with and beyond town hall forums from GLAAD and Gay Inc.

What about you adding your voice and talents to the chorus of the NYC gays pushing the community center to become transparent, Pam endorsing town halls for GLAAD and myself pressing Equality California to hold regular public meetings?

Let's not allow this crisis at GLAAD to be wasted on minor, cosmetic or a few personnel and board resignations. We need radical and fundamental changes, or GLAAD and Gay Inc will weather this storm and slink bank to business as usual and that will have a tremendous negative impact.

Open. Meetings. Now.
Posted by Unknown at 11:58 AM
Email ThisBlogThis!Share to TwitterShare to FacebookShare to Pinterest