Slumlords Gave How Much to Campos for Assembly?

The Legal Aid Society of San Mateo county and a private law firm in 2013 announced an out of court settlement with Dipak Patel, owner of the Industrial Hotel which primarily houses mentally challenged individuals. It was alleged that Patel ignored several deplorable conditions at his hotel including a bedbug infestation.

Patel is a member of an extended family of hotel owners who have long been the bane of housing advocates and residents of their dwellings. Lots more info on the Patel family and why they are viewed as slumlords is here.

The SF Examiner's Jessica Kwong in November 2014 wrote about the legal troubles of Nasir Patel because of shady housing practices:

"Steve Collier, an attorney with the Tenderloin Housing Clinic, on Wednesday filed a wrongful eviction lawsuit on behalf of Kirkbride and five other former tenants at 1040 Folsom St. against building owner Nasir Patel and Haber, alleging they refused to re-rent the units to the displaced occupants after the May 5, 2011, fire. [...]

"Collier pointed out that apart from failing to allegedly re-rent units to displaced tenants, the landlord in 2008 obtained a $100,000 interest-free loan from the Mayor's Office of Housing and Community Development to renovate the hotel and agreed to keep 10 units affordable to people making 40 percent of the area median income for 15 years.
"The office on Oct. 28 issued a notice of default on the loan due to Patel and Haber's alleged failure to rent the units at the agreed-upon rate."
According to public records, Dipak Patel gave Supervisor David Campos $2,000 for his assembly race, while the Nasir Patel Family Trust donated $200. 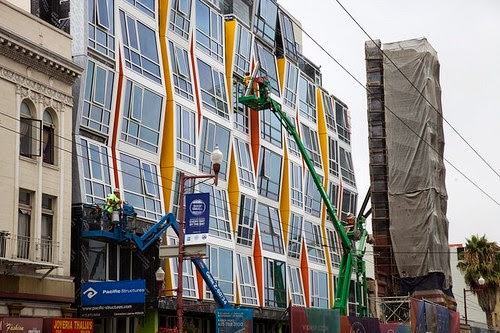 Campos also received $4,100 from Van Ness Clay LLC, the company that built and owns the outrageously expensive and hideously ugly luxury condos at the Vida complex, located 2558 Mission Street, pictured. Many protests have targeted the complex as a prime example of disfigurement and gentrification of the Mission.
What other Mission condo developer gave to Campos last year? The Mission Position blog in October reported Campos accepted $4,100 from the Residential Builders Association, $1,000 from Sean Keighran and $1,500 from his firm SJK Development, all of whom were pushing for Planning Commission approval of the 490 South Van Ness complex that neighbors were opposing.
A donation of $1,500 from Urban Inc sweetened Campos' coffers, and that development firm also pressured the commission and Campos also raked in $500 from Reuben and Junius, the law outfit for 490 South Van Ness. The Mission Position points out that Campos, after years of objections, in October dropped all opposition to this complex and it won approval for construction to begin. 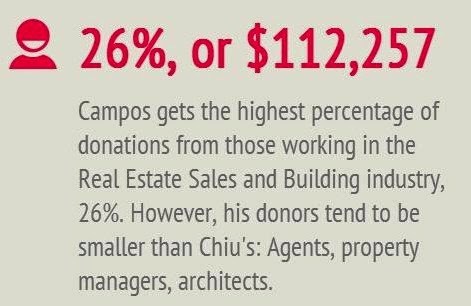 The folks at the Anti Eviction Mapping Project delved into Campos' donations and gleaned information showing at 26%, his largest category of donors came from people working in the real estate or building industries.
Just a few pieces of data found on the Campos money trail.
Posted by Unknown at 1:45 PM
Email ThisBlogThis!Share to TwitterShare to FacebookShare to Pinterest

Don't agree with your prognosis that the Vida building is hideously ugly. I think it's architecturally interesting and inviting. But, then, I often don't agree with who you consider "hot" either...