My friend Marc Salomon goofed up big time yesterday with his opinion piece for the San Francisco Examiner that plagiarized the work of others. The deleted the piece from their site yesterday afternoon.

I wrote to the manager editor Max DeNike asking why it was deleted and he replied:

"It came to our attention that parts of the op-ed were lifted verbatim from a story on People Power Media. Because of this, and after speaking with Marc and having him fess up, we felt it was right to remove it. We ran an editor's note in print this morning, and we will post it online as well." 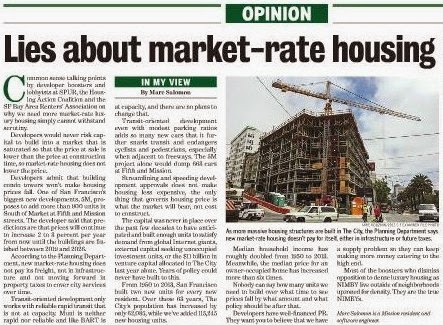 In my response asking him to repost the column, I said to DeNike that most papers keep the offending article up but with a clear explanation of the problems with it. I cited the New York Times maintaining Jayson Blair's fakery on their site and with a lot of notes about his plagiarism and other journalistic crimes. I pleaded with DeNike to reconsider keeping the piece off their site. He said:

"I do not fully agree with that, but I definitely understand your point. Perhaps leaving the story up with a note could serve as a lesson for others. It is a tough call -- obviously plagiarism is the most serious offense in the industry. I have shared your latest email with editor in chief Michael Howerton, who will have to make the ultimate call. In the meantime, here is the editor's note link."

And this is the note:

"Editor's Note: The op-ed “Lies about market-rate housing” in Tuesday’s San Francisco Examiner contained passages that were copied from the article “5 Facts: San Francisco’s Housing Crisis is NOT Because of Supply,” published by people.power.media last month. The op-ed has been removed from The Examiner’s website."

The PDF version of yesterday's print edition of the Ex is here and includes the op-ed.
Posted by Unknown at 5:15 PM
Email ThisBlogThis!Share to TwitterShare to FacebookShare to Pinterest