The violent altercation on August 10 between Feather Lynn, nee Bryan Higgins, a member of the Radical Faeries and Castro resident, and unknown male assailant that lead to his death on August 13 is a case of concern to me.

After receiving a November 19 update from the San Francisco Police Department in which they stated there were no leads in the case, I asked Briseida Banuelos, head of the department's legal division, why they waited more than a week before releasing video and screengrab images of the suspect. Nearly two-weeks later, she replied today:

The San Francisco Police Department (SFPD) received your additional request for information on November 19, 2014. We have looked into your request and respond as follows:

The short video and still photographs were raw material. Special processing was needed to maximize and highlight the image of the suspect in an effort to increase the likelihood the suspect would be identified.​

WTF? The department's budget is north of $470 million and it doesn't have tech equipment on hand to process cell phone or dashboard cam or closed circuit or other devices' capable of video recording to create images in a timely manner to help investigations in the crucial early hours and days after a crime has been committed? 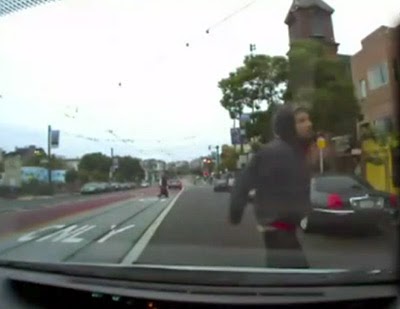 Here's the screengrab image the SFPD eventually released and they didn't crop it to emphasize the male figure in the gray hoodie.

Back on August 21 at the Hoodline.com site, Andew Dudley reported on the police putting out this image and a short video of the suspect. Dudley's readers asked why it took eleven days for the images to be released and he received this response from SFPD spokesman Albie Esparza:

We do not release video/photos of suspects until our investigators have exhausted all possible leads. It doesn't matter how long it takes. We have to work up a case as investigators to try and ID suspects. If we just release info right away to the media, a suspect could flee or hide making it hard to locate. If an investigator tries to ID a suspect, our chances are higher in apprehending. We release info after all leads have been exhausted.

Nothing about special processing mentioned in August and this SFPD statement is very much at odds with what was released to me today about special image processing. If this is how the department takes its sweet old time to ask the public for help in finding a suspect, it's no wonder crimes go unsolved in San Francisco like they do.

The investigation into the altercation that brought about Feather Lynn's tragic death has been botched by the police and I fear a suspect will never be questioned or apprehended.

Instead of just demanding more money to train additional cops because of Feather Lynn's killing, the District 8 Supervisor should also be asking hard questions about this investigation and police procedures performed, whether timely or tardy.

And if the department truly lacks high tech equipment to rapidly process videos, let's have the SFPD make a public request to tech companies to supply them with the needed tools to turn videos into timely usable images.
Posted by Unknown at 9:36 PM
Email ThisBlogThis!Share to TwitterShare to FacebookShare to Pinterest

The truth is that the SFPD are institutionally lazy and inept, and could care less about investigating a case like this. Unfortunately, there is also business as usual.