Back on November 8, the Coalition on Homelessness staged a headline-grabbing action at BART's Powell Street station to protest the agency's policy of preventing homeless folks from stretching out, laying down or sleeping on the concourse level.

Curious as to whether the COH also attended any BART board meetings to effect change and not just get press attention, I emailed their executive director Jennifer Friedenback and asked about followup work after the action. She has not replied. 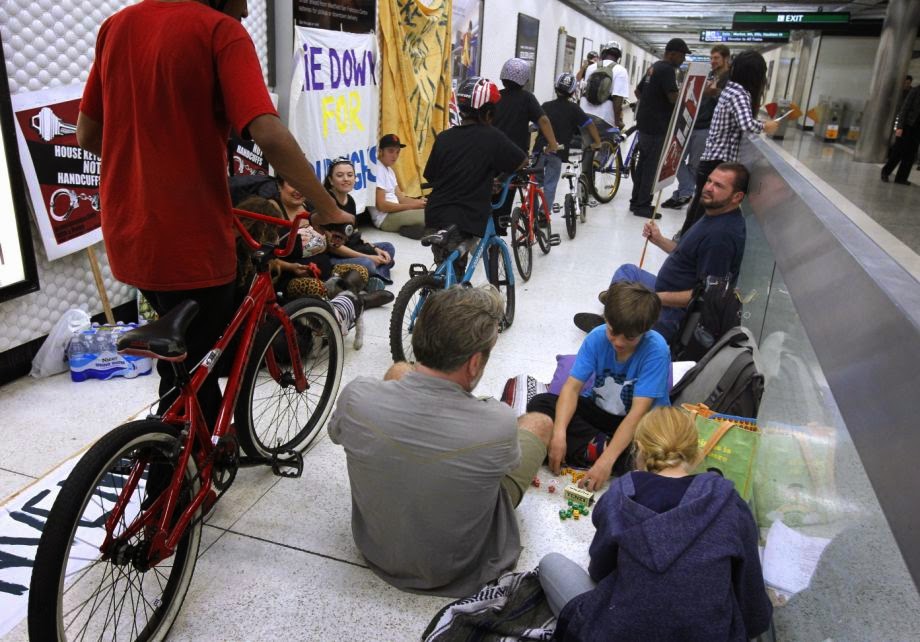 (Homeless folks and their advocates sit on the public walkway of the Powell Street BART station on Nov. 8. Credit: Paul Chinn, SF Chronicle.)

I'm supportive of the action but feel it's crucial to ask the COH and BART what impact it had on changing the transit agency's homeless and security policies.

Reading over minutes of recent board meetings, I didn't see any names of COH folks in attendance and it was a glaring omission that the minutes merely reported the names of public speakers and which item they opined on, but an actual written public record of what the public said could not be located. There's also the matter of inconsistent advance agenda availability and no minutes at all for BART's various committees.

A few days ago, I corresponded with Kenneth Duron, BART's district secretary about all this and his reply dances around the matter of no public comments are included in the minutes. He says the videos of the meetings can be watched to learn what public speakers said, but the same could be said about the remarks of the BART board members.

BART needs to simply write down the comments of public speakers at its meetings, so a written record of respect for what the public has to say is created. Here's Duron's reply to my questions:

I can address your inquiries regarding our Board meeting minutes.

Q: Did anyone from the general public or the Coalition on Homelessness address the board at that meeting?

A: Ms. Lisa Marie Alatorre, Coalition On Homelessness San Francisco, attended the December 4, 2014 Board Meeting. She completed a request to address the Board but was unable to stay. She provided a letter addressed to the Board of Directors. The letter was distributed to the Board and District staff.

Q: There are no comments included from any member of the public and if they were present representing an organization, that info is also omitted. Are BART minutes usually lacking any remarks from the public?

A: The District minutes record actions taken by the Board of Directors and the names of individuals addressing the Board on a particular topic or under general public comment (for items not on the agenda). The District makes video/audio record of the Board Meeting, including public comment, available on our website via live streaming and on demand recording (http://www.bart.gov/about/bod/multimedia). The website design enables the reviewer to go to a particular agenda item to expedite review. The balance of your questions have been referred to our Communications Department for review and response.

These are the other questions I asked of BART that I hope are answered this week: Did the action in any way persuade BART to reconsider or change its policy about moving the homeless folks out of the station for security reasons? What impact on BART did the action have?

When I receive answers from either the COH or BART, they'll be posted here.
Posted by Unknown at 11:15 AM
Email ThisBlogThis!Share to TwitterShare to FacebookShare to Pinterest