DA Denies Emails Exist About His Unethical Fundraiser
George Gascon is San Francisco's district attorney and at his core, he's a politician with ambitions and must be closely monitored in how he runs this office. 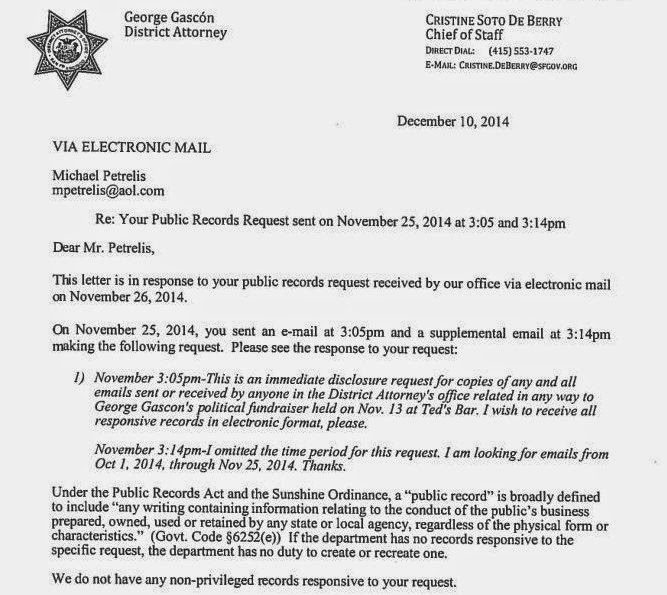 In response to my public records request for copies of emails about a Nov. 13 fundraiser to reelect Gascon, held just a stone's throw from the DA's office at the Hall of Justice, the DA claims he "does not have any non-privileged records responsive" to my request.

There may be privileged records about the fundraiser but we're just going to have trust a single source, the DA, that the DA himself and top staffers didn't create any public records about the questionable event to solicit donations. Just one more example of how there should be an independent body with oversight powers keeping tabs on Gascon and this office.

"Seventeen prosecutors — mostly misdemeanor deputies — lent their names to the party invitation that was circulated to the rest of the office. From what we’re told, a number of attendees felt they had no choice but to give or risk damaging their careers. The event reportedly brought in about $10,000 for Gascón’s 2015 re-election campaign. [...] Gascón himself was on hand at the event, and after the money pitch from a homicide deputy, he thanked the crowd for showing up to support him. [...] Lawyers with the city attorney’s office declined to comment."

According to Gascon's political consultant running his reelection campaign, Dan Newman, the DA returned the money donated and his supporters were full of good intentions. 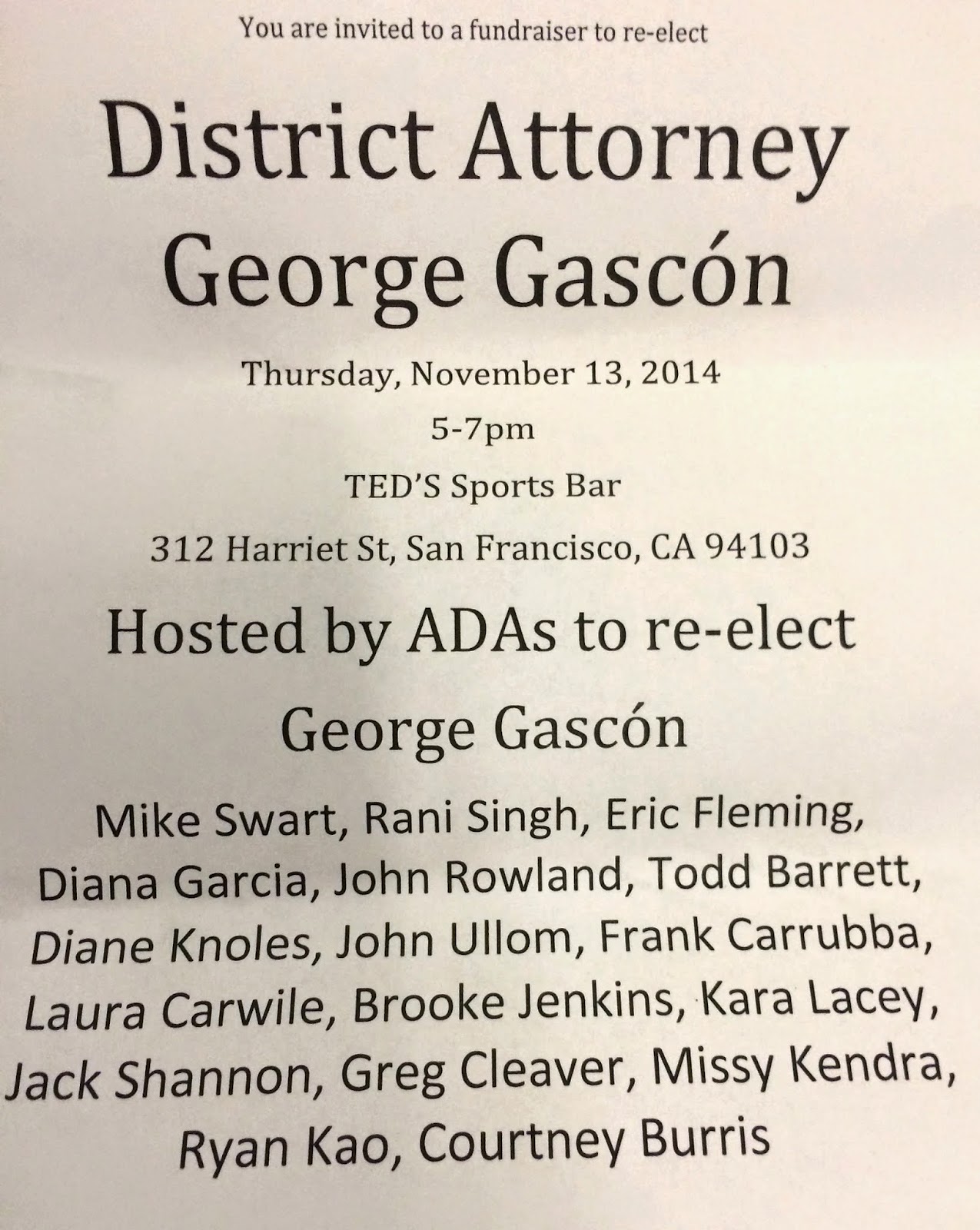 Here we have a top law enforcement official potentially violating several good government laws and well, he's basically said he was sorry and folks should just move along, there's nothing to see here.

Gosh, what if everyone accused of wrong-doing were allowed to just say "I'm sorry" and no investigation initiated when evidence exists that a law or two were broken?

To top it all off, the City Attorney Dennis Herrera, who is supposed to watchdog other elected officials through his Public Integrity Unit, had nothing to say to the Chronicle. Pardon my mixing of animal metaphors, but when it comes to ambitious politicians Gascon and Herrera, they're birds of feather sticking together.

In January, Herrera made an announcement regarding a new hire for his office (http://tinyurl.com/CA-public-integrity-unit):

"[V]eteran prosecutor David Pfeifer will join the San Francisco City Attorney's Office as Chief of the Public Integrity Unit, where he will oversee all of the office's civil litigation and investigations involving government ethics, contracting fraud, employee misconduct, false claims and similar cases. Pfeifer served in the San Francisco District Attorney's Office for more than 23 years, where he rose to serve as chief assistant, first under former District Attorney Kamala D. Harris and later under current District Attorney George Gascón."

What a lousy racket. The head of the City Attorney's unit to investigate ethical violations of elected officials spent more than two-decades working for the District Attorney. Quite a conflict of interest when the CA may have to look at a fundraiser of questionable legality and ethics held by the DA.
Posted by Unknown at 3:51 PM
Email ThisBlogThis!Share to TwitterShare to FacebookShare to Pinterest