Sony Censorship Prompts Xmas Theatre Boycott
Several San Francisco film-lovers have created an ad hoc group, Cineastes Against Censorship, in response to Sony pulling release of "The Interview" because of hacking and threats by North Korea.

We are calling for a boycott from December 25 through January 4, of movie chains refusing to show "The Interview": AMC Theatres, Regal Theatres, Cinemark Theatres, Cineplex Movies and Carmike Cinemas.

During the boycott, we urge everyone to catch a movie at their local art house, film archive or indie chain. Support alternative venues for movie-going year-round, as one form of protest against Hollywood's capitulation to North Korea and trampling free expression. 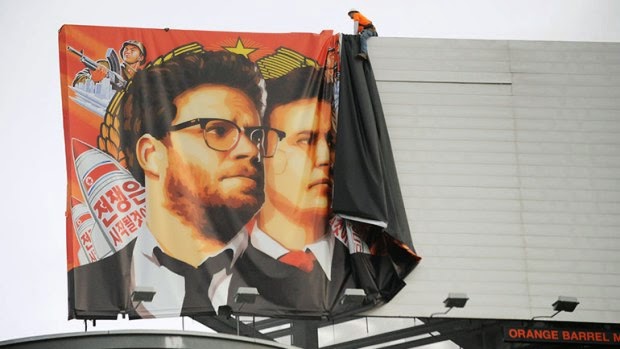 (A billboard in Los Angeles for "The Interview" was removed this week. Public domain photo.)

All movie-goers upset with Sony's decision to pull "The Interview", Comcast refusing to show it on-demand if Sony allowed such availability, Paramount Pictures banning screenings of "Team America" and the cowardice of the movie chains, are invited to join our protest.

Please leave a comment, or email me directly at MPetrelis@aol.com, if you can attend the presser on December 22.
Posted by Unknown at 4:05 PM
Email ThisBlogThis!Share to TwitterShare to FacebookShare to Pinterest