SF Pride & Manning Critic Faces Sexual Assault Charges(Cross-posted from my Petrelis 4 Mayor page at Facebook)
After it was announced in April 2013 that WikiLeaks hero Chelsea Manning would be honored by San Francisco Pride as a grand marshal of the annual LGBT parade, gay soldier Josh Seefried took to social media deploring the decision. 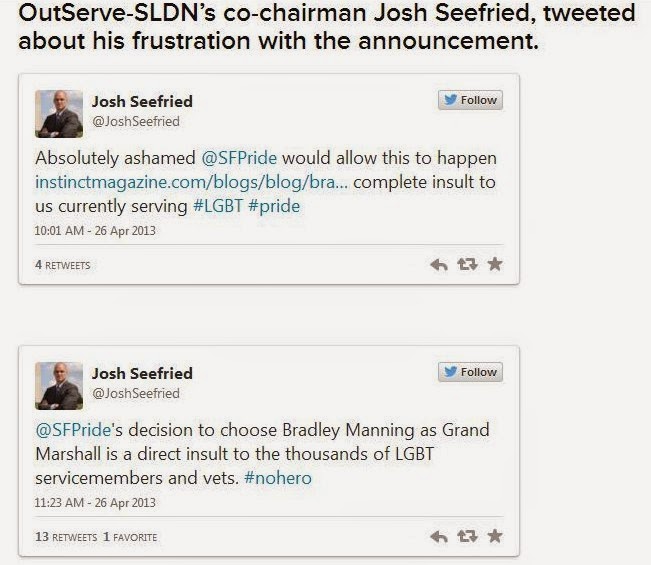 Months of raw emotions and controversy erupted when SF Pride rescinded the honor for Manning, leading to major upheavals at the organizations and lingering resentments between LGBT peace and justice advocates and gay soldiers in league with Seefried.

"Gay Air Force Lt. Joshua Seefried, a prominent advocate for the rights of gays in the military, is tentatively scheduled to go on trial in a court-martial next month on sexual assault charges at Andrews Air Force Base in Maryland.

"In a development that until now has gone unreported in the media, Seefried was charged in April with wrongful sexual contact and forcible sodomy. In October, his commanding officer at Fort Meade in Maryland, where he’s currently stationed, added an additional charge of abusive sexual contact.

"Statements made by military prosecutors at a pre-trial motions hearing at Andrews on Monday revealed that the three charges stem from an accusation by U.S. Marine Lt. Edgar Luna, who’s gay, that Seefried allegedly performed sexual acts on him in a hotel room in New York City in May 2012 at a time when Luna says he was intoxicated and unable to give consent. [...]

"The officer, Air Force Col. Robert Preston, presided over an Article 32 hearing on the case in September. Article 32 hearings in the military are similar to civilian grand jury proceedings. At the conclusion of the hearing Preston recommended in his report that the case against Seefried should not proceed to trial by court-martial because there was insufficient evidence to obtain a conviction and that Seefried would most likely be acquitted.

Chibbaro also noted that a hearing before a military version of a civilian grand jury was held in September and the presiding officer advised dropping the charges and not pursuing a court martial against Seefried.

It's crucial to remember he's not been convicted of any crime at this point and more facts about the charges and persons involved are sure to be released to the public in coming weeks. We'll see how this legal story unfolds and what happens to Seefried.

I salute Chibbaro for breaking this story and presenting many known facts to us. Many of us will follow his future coverage in the Washington Blade of Seefried's troubles.
Posted by Unknown at 12:24 PM
Email ThisBlogThis!Share to TwitterShare to FacebookShare to Pinterest

I am not sure the tie in to LT Seefried's criticism of the Manning case? Is it reporting on his case or are you trying to show he got what he deserved? The two are really mutually exclusive

Since Seefried was a key leader in creating the SF Pride decision to revoke the grant marshal honor to Chelsea Manning, I found his legal troubles of interest. No, I am not saying at all that "he got what he deserved". I'm simply saying that the Blade is reporting he's been charged with sexual assault and San Francisco folks may remember him from the Manning debacle.46a