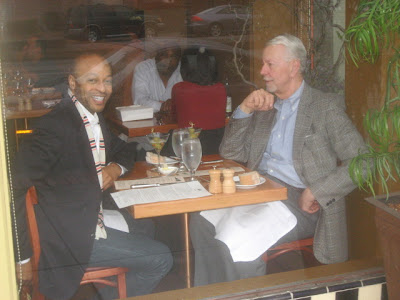 (Brett Andrews, left, executive director of the Positive Resource Center, with his platonic friend Judge Vaughn Walker. Photo credit: Petrelis Files.)
When I spotted Brett Andrews at a window table at the 2223 Market Street restaurant in the Castro on May 18, he was having cocktails and dinner with Vaughn Walker. As noted in my report on snapping the photo and engaging in a very short chat with Walker inside the restaurant, I asked him to come out of the closet, the conversation went nowhere and I wished both men a good meal, before leaving.

I forgot to ask Brett if he was the romantic partner to the judge, and today Brett left me a voice mail message saying he is only friends with him, not his boyfriend. He also said he had no comment on the judge's personal life.

The reason why I called Brett about all this is because last night I remembered a February 15 column by San Francisco Chronicle editor-in-chief Phil Bronstein, in which he not only mentioned Walker being gay but also broached the subject of his boyfriend, emphasis mine:

Here in San Francisco, everyone held their collective breath when The Chronicle outed Vaughn Walker, the federal judge hearing the same-sex marriage/Proposition 8 case. Walker is gay and has a partner, meaning that if the two of them wanted to get married, the judge would be ruling on an issue in which he would have not just a general, civil rights interest but also a direct stake. [...]

As someone who blogged about Walker's sexual orientation way before the Chronicle outed him, I wasn't among those holding their breath, but I did wonder about the rumors that he had a boyfriend.

I think the Chronicle was the first news outlet to report on Walker's partner, and the Bronstein column was on my mind after Walker found Prop 8 unconstitutional, because I wondered if he would be marrying his partner, if his ruling is eventually upheld by the Supreme Court.

By the way, Bronstein framed the marriage question for Walker and his partner as an "if" question, leading me to think the paper put some resources into searching county assessor records across California and found no marriage license issued to the judge. Surely the Chronicle would have reported on such a license for him, if evidence had been located.

Maybe now that he's rendered his decision in the Prop 8 trial, Walker will agree to publicly discuss the many questions and curiosities about his sexual orientation.

(This fuzzy photo was snapped after the one above, and I wish to point out that in both photos, Walker's body language is open and somewhat friendly.)
Posted by Unknown at 3:35 PM
Email ThisBlogThis!Share to TwitterShare to FacebookShare to Pinterest