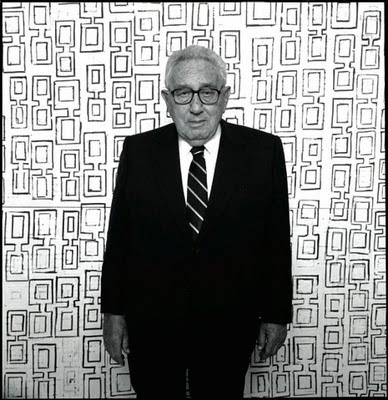 If war criminal Henry Kissinger ever needed a medical reason for using marijuana, it would likely be for stress related to his fear of being indicted, successfully prosecuted, and receiving a well-deserved extended incarceration for crimes against humanity.

May I live so long to see him standing in the prisoner dock at the International Court of Justice in The Hague. Click here to read part one Christopher Hitchens' case against Kissinger.

But I digress. According to SF Chronicle gossip columnist Leah Garchik in her August 2 report on the powerful members of the ultra-exclusive Bohemian Grove gathering for fun and games, and she says Kissinger was part of a revue:

One entertainment highlight, I am told, was Henry Kissinger playing the role of a stoner. "The crowd roared" is my spy's description of the critical reaction.

He should be sitting in a prison cell, instead of enjoying a privileged life in the woods of Northern California.
Posted by Unknown at 5:06 PM
Email ThisBlogThis!Share to TwitterShare to FacebookShare to Pinterest