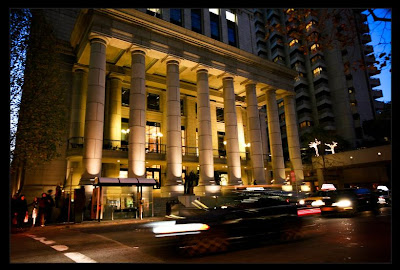 Chad Griffin, the gay LA powerbroker who brought together the forces behind the Prop 8 lawsuit argued by Ted Olson and David Boies, was in town on Sunday, July 25, and I ran into him and a friend near the Flax art store on Market Street. Honestly, I almost didn't recognize him without his trademark fancy suit on, and no America flags serving as his backdrop.

It was all very Dore Alley Sunday-friendly, and after thanking Chad for taking on this monumental project, I asked what he was going to do next. "The movement's a mess, you know," I said. "It's needs some more changing and shaking up."

He laughed, and replied, "Let's get through the trial, and everything that comes after it, leading up to the Supreme Court." I heard him, and still repeated that our movement is a mess.

We spoke a bit about how beneficial it was to have the trial transcript out there on the web for all to read. Chad was diplomatic in explaining to his companion how I had bugged and nudged him, and his great and handsome but straight p.r. guy Yusef Robb, last year, during prelim proceedings, to buy the transcript from the court reporter and make them publicly available, for free. Of course, none of us knew that coming down the pike was a Supreme Court ruling barring cameras and audio taping of the trial, making the transcript of even higher value.

I'm proud to have played a small role early on in making the trial as transparent as possible, by pushing Chad and Yusef, with just pure sunshine principles guiding me. And now, I can't wait to learn what Judge Vaughn Walker, a gay man and high caliber jurist, has decided.

The press release from the plaintiffs, is it too early to say the "winning side"?, states the official post-decision and reaction from the plaintiff couples, Olson, Boies and Chad will take place, time to be announced, at the Bentley Reserve here in San Francisco. Being unfamiliar with the venue, I went to its web site and once I saw the photo of the dramatic front, it registered as a building I had passed many times.

What I didn't know until tonight is that the Bentley Reserve is a leading spot for high-end weddings, and I find that fact a nice touch. The official presser for the plaintiffs will be at a site frequently rented out for wedding receptions. Leave it to the Hollywood gays to think of a fabulous location for the end of act one in this drama.

Yep, a very appropriate venue for the plaintiffs' side. Posted by Unknown at 9:17 PM
Email ThisBlogThis!Share to TwitterShare to FacebookShare to Pinterest

Not only is our building a beautiful venue (and a leading spot for conferences too), but we have been long time supporters of the cause. We co-sponsored with Equality California:
http://pursuitofequality.org

We may not be in the forefront, but we've been rooting with our marketing, design, and influence however we can. We look forward to their event today!