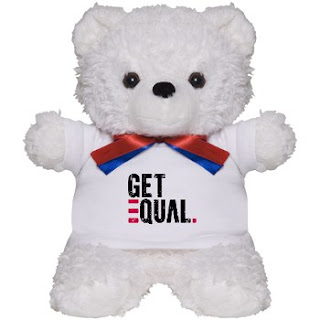 (Wanna buy one of these cuddly bears? Go here for more info.)

Robin McGehee of GetEQUAL responded over the weekend to several concerns of mine, which are longstanding, regarding the org's refusal to post some basic budget and salary info on their site. Those fiscal transparency matters are on top of other questions over their agenda and organizing plans.

The nub here is that GE thinks sharing bits of info on financials at sites other than their own equals transparency. It doesn't. To understand better how GE wants others to meet the org's transparency, read a quote from their release for a telephone press conference tomorrow:

“We look forward to being able to communicate to the LGBT community, via our dedicated LGBT press corps, the exciting new announcements for the future of GetEQUAL, and to come one step closer in fulfilling our commitment to transparency and openness.”

Huh? They expect to meet GE's commitment to transparency via butt-kissing reporters and bloggers. GE transparency could be so simple if they would just post their budget and salaries, and other key info, on their own site.

Jonathan Lewis provided us with 190k to start for 6 months and, most recently, with the check for 250k you saw Kip put on Facebook, allowing us an additional 6 months to continue our efforts.

We have collected small donations online, but they are less than $10,000 and we are not going to be putting a line item budget online at this time, but we will file the appropriate records and list what seems relevant as we prepare that info.

We had people who asked us for shirts/merchandise during the National Equality March and we set up an account with CafePress (allowing us to only give the logo and they create the items, sell them, and then mail us a very minimal profit on each item sold).

Once the March ended, we opened an account for GetEQUAL, because the same request came in, and we have raised $1200 for the items we have been able to sell online (I think it is about $3 a shirt or some ridiculously low amount).

You have seen the salaries for our more experienced staff - I make 89k, Heather 70k, and Kip is shifting down to 58k as he'll be moving to operations and technology manager and is reducing work responsibilities...one of the things we'll talk more about on the [Tuesday call].

We are updating our site daily and will continue to do so, as we see fit and as information unfolds.

Okay enough, but how about telling the community about all staffers' salaries, not just the more experienced? And what about independent contractors, such as Brad Luna, former Human Rights Campaign spokesman, who serves as GE's press rep? What is his retainer fee?

Related to all this are the outstanding questions why GE doesn't attract more than a handful of the same folks to their actions. The latest blogger to ask for answers is a young gay blogger named Chris. From his MyGayLife blog:

I understand the need to keep their actions quiet beforehand to prevent the police from being ready for them, but I really think they need to find a way to get more people involved.

After eight months, blogger Chris has a valid point about the small number of activists participating in GE protests. We'll see if the conference call presents a plan to increase participation for the org.
Posted by Unknown at 7:48 PM
Email ThisBlogThis!Share to TwitterShare to FacebookShare to Pinterest

Actually the GetEqual FAQ is putting out misinformation regarding accountability. Until a reaql permanent board is created only Kip William's name is on the documents that have incorperated GE and on the GE bank accounts. Therefore though Robin may be the "Director," Kip is the entire board and Robin is Kip's employee.

More importantly fron a legal point of view, if anyone is injured at a GE event or anyone sues GE, Kip will be the only personal legally liable for damages.

Of course, nobody has seen ANY paperwork from GE.

Kip has a great story to tell - soon.