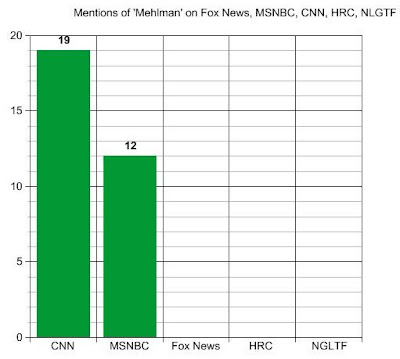 Let's chalk it up to Gay Inc again failing to lead, never mind participate in the public square and join with the rest of the community in debating the many ramifications of former Republican Party homo honcho Ken Mehlman stating the obvious and declaring his gayness in the media.

No matter how you slice Mehlman smashing his glass closet door finally, it was big news for us gays, and the larger American political scene. Well, that ain't the full truth. Mehlman's self-outing was not news of any sort over at the Fox News operation. From Think Progress:

[A]fter the Atlantic’s Marc Ambinder reported that former RNC Chairman Ken Mehlman — who had orchestrated President Bush’s gay-bating 2004 re-election campaign — was coming out as gay, Fox News Channel remained [...] mum and as of this posting has yet to run a single segment on the story.

A Wonk Room review of Critical Mention reveals that CNN mentioned the name “Mehlman” 19 times, MSNBC reported on it 12 times (searches for “gay” and “Ken” produced similar results, with Fox News stuck at 0).

A Petrelis Files review of how many times the Human Rights Campaign and the National Gay and Lesbian Task Force (follow the links), the nation's two largest and richest profession political orgs, reveals that neither has mentioned the name "Mehlman" once on their sites, relevant to his gayness.

I'm not saying Gay Inc needs to show outing and accountability leadership, as finely displayed by blogger/advocate Mike Rogers in 2004 when he outed Mehlman, but when the political discourse is raging with opinions and facts and some mistruths, all pertaining to the Gay Agenda, yes, I expect the two richest gay political orgs to weigh in on it all.

And Gay Inc could also explain how their resistance to, or support of, or occasionally tolerance of when it suits their Democratic Party allegiances, and now silence over Mehlman, is advancing changes at the federal level. For the millions HRC and NGLTF rake in annually to be our, um, spokespeople, I expect some words to flow from the orgs.

The silence of HRC and NGLTF with Mehlman is more of the same disgusting and harmful non-engagement wired into the DNA of the orgs.
Posted by Unknown at 7:46 PM
Email ThisBlogThis!Share to TwitterShare to FacebookShare to Pinterest