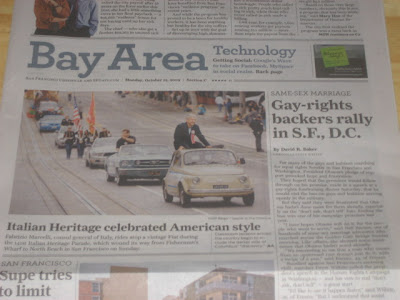 (The first page of the Bay Area section of Monday morning's SF Chronicle.)
[Updated at the bottom.]
[Updated again: NLGJA looks at the coverage in papers today.]

Given the heavy presence and involvement of San Francisco gays in Cleve Jones' march and rally in DC on Sunday, I expected either a front-page article or at least a teaser in SF Chronicle this morning. Not only was the march missing from the front-page, any reference to it was omitted from the main news section.

The Chronicle editors decided to make a passing reference to the DC events in a larger local story about an annual gay marriage march across the Golden Gate Bridge. Here is all of what the major daily in America's gayest city had say about what happened in DC on Sunday:

In Washington, thousands of gay-rights supporters marched Sunday from the White House to the Capitol, demanding that Obama keep his promises to the community. Rainbow flags and homemade signs dotted the crowds filling Pennsylvania Avenue in front of the White House.

If this how the SF Chronicle covered the march, I question if other local papers did any better with their reporting.

Reader and friend Craig Brownstein, who co-edits the Who Killed Robert Wone? site in DC, sent me this link to the Newseum's collection of the front pages today of more than 700 newspaper across the nation and around the world. It would be good if the march organizers went over the front pages and see what sort of coverage, if any, the event generated at the local print press level.

Another pal and blog reader, David Webb of Dallas' The Rare Reporter shares this info:

Your aroused my curiosity so I went out and bought a Dallas Morning News. The march story has a promo on page one. The story is on Page 5 of the front section. It is at the top of the page. It has a large color photo (about 5X7) centered in the story. It is an Associated Press story measuring about 14-15 inches by Brett Zongker.

From Los Angeles, one more pal and reader, Mike Barr, writes in:

National edition of the NY Times (at least here in Los Angeles) is same: below the fold tie-dye photo on front page "A new generation of advocates call for changes" with kicker to four 4" columns at bottom of A11.

And from NYC, Bill Dobbs reports:

This morning's NY Post has a 6 inch story, no photo, at the bottom of page 6, head is 'Gay-rights marchers in plea to O'. Byline is AP.

NY Times print edition in NYC has a photo on the cover with a kicker about
coverage inside which is at the bottom of a page.

Perhaps the march organizers will cull the paper clips and put out a report
or post them online...

What ran in your local paper?

From Michael R. Triplett of the National Lesbian and Gay Journalists' Association comes this important analysis of how some papers coverage yesterday's DC march and rally:

Relying on the Newseum’s Today’s Front Page website that features the front pages of newspapers around the world, it’s clear the march got very little page-one play. A march story made the front page of the Chicago Tribune and the Denver Post, which ran the New York Times story.

In California, neither the LA Times or San Diego Union Tribune mentioned the march at all on the front page. The Orange County Register had teaser to a page 12 story, the San Francisco Chronicle teased a lead story in the metro section. In Florida, the Sun-Sentinel had no mention of the march on the front page, while the Miami Herald teased a page 3 story at the top of the paper and the St. Pete Times had a brief to inside story.

No mention on the front page of the Atlanta Journal-Constitution, St. Louis Post-Dispatch, Wall Street Journal, Cleveland Plain Dealer, the Oregonian, or the Houston Chronicle. [...]

There are plenty of reasons to explain why a story does or doesn’t end up on the front page of the largest newspapers, but it is surprising the story only made the front pages of three papers. On the day after the president speaks to the nation’s largest LGBT group, tens of thousands of people head to the streets in the nation’s capitol, yet only three major newspapers featured the story. The next time someone mentions a liberal bias or a pro-gay bias in the news, it’s worthwhile to think about how this story was played by the major U.S. news outlets.

Thanks, Michael, for doing the movement a favor with your research. And let me emphasize, it's worth the time to read what NLGJA is reporting, and you'll find links to many of the papers at their post.
Posted by Unknown at 11:05 AM
Email ThisBlogThis!Share to TwitterShare to FacebookShare to Pinterest

The NYT devoted more coverage to "dissent" between groups over the March than they did to the protest itself.

Clearly, gay drama is more interesting to our national press than civil rights.