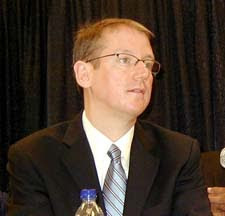 (The White House's Office of National AIDS Policy director Jeff Crowley. Photo credit: Bob Roehr, BAR.)
The rightwing succeeded in forcing White House green jobs adviser Van Jones to resign from his post in September, because of controversial positions he took as a progressive advocate in the San Francisco Bay Area before accepting a position in the Obama administration.

After Jones resigned, the rightwingers revived and amplified their criticism against Kevin Jennings, a gay man heading up the safe schools effort within the Department of Education. So far, he's kept his job, and the support of the President's top staffers, but the conservatives who want Jennings forced out are not relenting in their campaign against him.

Who might be next in the rightwing's crosshairs of Obama advisers and staffers they want to resign or receive a pink slip? I think the next target could be Jeff Crowley, the director of the White House's Office of National AIDS Policy. Crowley is conducting town halls around the country, very much controlled by AIDS Inc groups and leaders showing, IMO, that he is not under the influence of any radical activists. He's a stalwart mainstreamer and has publicly stated his fears of cable news shows related to HIV prevention advances and gay men.

A hard-right blog, whose author remains anonymous, called ParrotPatriot, seems to be getting the ball rolling to make Crowley the next person targeted for smearing and intense scrutiny for any missteps anathema to conservatives. The person behind the blog describes himself thus:

It’s in the blood. I’m a patriot. I won’t be silent. I can’t be silent. It’s impossible. I am strong willed and angry like the Scotch-Irish from whom I’m descended. I am the red-haired grandchild that my great, great, great grandmother always wanted. I’ll be described the same way she was when I’m gone. “That parrotpatriot was “firey”,” they’ll say about me. And then they’ll laugh hysterically at all the stupid things I did to get myself in trouble with my mouth and the words that come out of it. And when they do, they will most certainly wonder if, like Grandma Page, I’ve buried my silver and two enemy soldiers in the backyard.

ParrotPatriot's blog is one hot-blooded, red meat kind of site, and it very curious about Crowley's resume, which the blogger has posted here. My gut says the resume is being put out there so other conservatives can go over it and use the info to dig up dirt on Crowley. Click here to read a 2005 policy brief by him on Medicare's drug program restructuring, which was posted by ParrotPatriot.

At this point, I can't say there is a full-fledged campaign to get Crowley to resign or get fired, based only on the fact his pre-White House employment resume and a paper he penned have been posted on the web by a rightwinger, but I'd advise Crowley to be mindful of all this. ParrotPatriot is not sharing his resume and paper because he likes them or Crowley.
Posted by Unknown at 9:39 AM
Email ThisBlogThis!Share to TwitterShare to FacebookShare to Pinterest