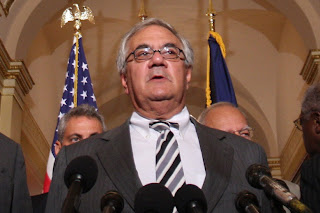 Barney Frank Skipping Cleve's March;
He's in CA to Fundraise
Do you get the sense that Barney Frank is not at all interested in Cleve Jones' gay march and rally in DC this weekend? Maybe the long-serving openly gay Congressman just isn't into the Lady-Ga-Ga-palooza aspects of the National Equality March. I suspect he has no time or patience for the march, the leaders of it, and the nebulous goals that are supposed to be achieved.

How far away from Washington will Barney be when lots of gay people descend on the capital in a few days? He will be on the opposite side of the continent.

Congressman Barney Frank (D-Massachusetts), the House's longest-serving out gay member, will drop in to the North Bay this weekend for two fundraisers before jetting back to Washington, D.C. The events are to help Frank raise a campaign war chest for his re-election next year. [...]

Frank's trip out west coincides with the National Equality March taking place this weekend in the nation's capital. As of this Wednesday, Frank's name was missing from the list of people endorsing the LGBT gathering on the National Mall.

He surely doesn't care that his name is missing from that list. Over at Queerty.com, Barney is quoted from a recent radio interview in which he opined on the march:

"People are kidding themselves. I don't want people patting themselves on the back for doing something that is useless."

Thank you, Barney, for speaking some much needed truth.
Posted by Unknown at 10:26 PM
Email ThisBlogThis!Share to TwitterShare to FacebookShare to Pinterest

As is every single Member of the House and Senate.

This is what happens when you only begin to reach out to congressional offices a few weeks before an event, as was admitted publicly by NEM organizers.

Barney made a wise choice lest he get branded as a socialist. What pisses me off about NEM is the selection of speakers. The executive committee specifically decided they didn't want Rep. Nadler, ...but they do want the Socialists. Alana Smith is the latest addition. (I asked who?). She is a writer with the Socialist Worker and sidekick to Sherry Wolf, also a speaker.
The two twinkie Cleve-groupies organizing this are naieve and lack experience. The New Alliance Party (also Socialist) tried to co-opt the 87 march. Every socialist group tried to co-opt ACT UP in it's heyday.

If they allowed other veteran organizers to actually make decisions or at least listened to other people with experience instead of just Cleve, they would have known the socialists always show up (not terrible into itself, Bayard Rustin was a Marxist) and will try and co-opt if you let them...which they inadvertently are.
I am just worried that we will get branded as socialists, a mark we don't need.
.

Spotted Barney here in SF over the weekend. Was surprised he wasn't in DC with so many others, but after reading this, I guess I was the last to know he wasn't going anyway!