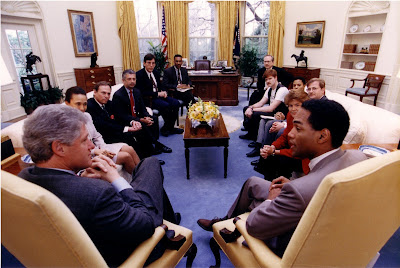 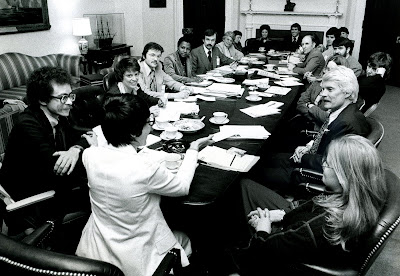 Further back in time, on March 27, 1978, and Jimmy Carter was President, one of his semi-closeted staffers, Midge Constanza, convened a meeting of gay leaders at the White House. Carter was nowhere to be seen. Key participants included several folks from the National Gay and Lesbian Task Force, which marked the 30th anniversary of this historic meeting with a press release earlier this year. NGLTF omitted any reference to our current President and certainly didn't call on him to deliver on campaign promises.


Speaking of Presidents and gay leaders, I remember very well when NGLTF's then-executive director, Urvashi Vaid, courageously heckled then-President George Bush on March 29, 1990, during his speech on AIDS. My activist heart burst with pride and pleasure reading about Urvashi's disruption of the President's talk, and praised her necessary action in print. She held aloft a sign that on one side read "Remember Gay People With AIDS," and on the front said "Talk Is Cheap. AIDS Funding Is Not."

I looked at these photos again, just to remind myself of some of our community's public interactions with our nation's top elected leader, and to ponder an ideal situation, IMO, for Saturday night when Obama addresses the Human Rights Campaign dinner and fundraiser. I would like to see both a respectful reception for Obama, and an appropriate visible or vocal push by the crowd to let him know we want substantive change from him, like yesterday.

Any chance the HRC crowd will chant "Stop-Loss Now," urging him to sign an order putting an to the military ejecting gays until the Don't Ask, Don't Tell policy is lifted? Maybe hold up big pens, that he could use to sign a "stop-loss" executive order?

Something other than wild applause and cheering just for showing. Please. We deserve mor than a great speech and we should make sure Obama understands that.
Posted by Unknown at 11:04 AM
Email ThisBlogThis!Share to TwitterShare to FacebookShare to Pinterest