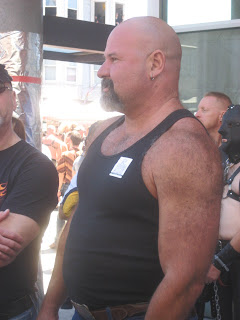 (Just one reason why we love the Folsom Street and Dore Alley fairs.)
Last week I was pushing the folks who put on the annual Folsom Street Fair to hold a community meeting, to discuss a few issues of concern to me, including my displeasure with children and dogs at the event. Though there was plenty of mature and furry male eye-candy at Folsom and Dore Alley, both put on by the same nonprofit, I missed the public sex that once was part of the fun.

I feel a public forum will go far to make the fairs even more fabulous than they already are, and I'm very happy to report that such a forum is in the works, and will happen soon. Read the letter I received from the head of the fairs:

As promised, the Folsom Street Events board of directors reviewed the idea of a public forum, and it was approved. Supervisor Bevan Dufty has agreed to host the meeting at City Hall, and we are looking at appropriate dates in November.

We need to have the forum after our charitable giving ceremony for two reasons: 1. Our philanthropy is (and always has been) one of our main priorities; and, 2. We would like for our beneficiaries to participate fully. We want an open and honest discussion.

Additionally, I understand that we will be working with Bevan's office to make sure that the proper City agencies are represented at the forum (e.g. MTA, SFPD, Entertainment Commission). I would like them to go on record about the changes in enforcement. I hope comments from the various department representatives will shed some light on the situations at hand.

We are looking at a time frame from 6:00pm - 7:30pm, but I have to confirm all the details with Nicolas at Bevan's office, of course.

But the thanks must also go out to Demetri, his staff, board and volunteers, for their hard work organizing the fair, and now, for engaging in truly fine community engagement.

Many gay San Franciscans will recall it took four long months of pushing, cajoling and shaming to get the No on 8 leaders to agree to hold a town hall after we lost gay marriage rights in CA at the ballot box in November. It wasn't until February that the No on 8 leaders engaged the local community about what went wrong and how to make things right.

And we've all seen how Cleve Jones and his crew behind the October 11 march on DC, haven't held any public organizing meetings, leading many people to justifiably criticize the organizers, and to refrain from supporting or participating in the march.

Lack of public meetings on a regular basis with our nonprofit advocacy organizations and political leaders is simply unhealthy for the gay community.

But now we have this shining example of the Folsom Street Fair leaders hearing a need for public discussion, and quickly agreeing to hold a forum for all stakeholders. May the executive directors and leaders at Equality California, the Cleve march on DC, the Human Rights Campaign, and other gay institutions learn from and emulate the actions of Demetri Moshoyannis.

After all, Demetri and his crew annually attract hundreds of thousands of people to the fair, and there's a lot to be said any day about getting gays off their computers and into the streets for gay liberation and free sexuality.
Posted by Unknown at 3:22 PM
Email ThisBlogThis!Share to TwitterShare to FacebookShare to Pinterest