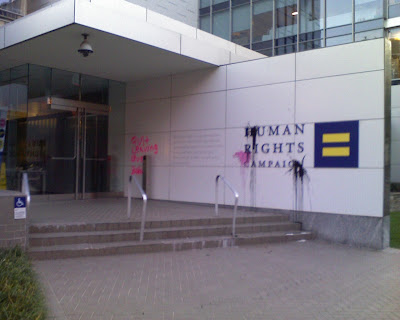 (The message in pink on the far left reads "Quit Leaving Queers Out," according to Leslie Ewing, who took the picture. Frankly, I can't make out the last two words, can you? Click on the pic to enlarge it.)
According to several LGBT bloggers, the Human Rights Campaign's headquarter on Rhode Island Avenue in DC was the target of angry vandal in the early morning on Sunday. All I have to say is I was on the other side of the country when this act of urban redecorating was carried out. Frustration with America's largest gay Democratic Party group appears to be rising. Will anything force HRC to start putting LGBT people and our needs first, Democrats' needs second?

Here is the message people allegedly responsible for the action left at LezGetReal:

Communique from the Forgotten:

HRC headquarters was rocked by an act of glamdalism last night by a crew of radical queer and allied folks armed with pink and black paint and glitter grenades. Beside the front entrance and the inscribed mission statement now reads a tag, “Quit leaving queers behind.”

The HRC is not a democratic or inclusive institution, especially for the people who they claim to represent. Just like society today, the HRC is run by a few wealthy elites who are in bed with corporate sponsors who proliferate militarism, heteronormativity, and capitalist exploitation. The sweatshops (Nike), war crimes (Lockheed Martin), assaults on working class people (Bank of America, Deloitte, Chase Bank, Citi Group, Wachovia Bank) and patriarchy (American Apparel) caused by their sponsors is a hypocrisy for an organization with “human rights” in their name.

The queer liberation movement has been misrepresented and co-opted by the HRC. The HRC marginalizes us into a limited struggle for aspiring homosexual elites to regain the privilege that they’ve lost and climb the social ladder towards becoming bourgeoisie.

Last night, Obama spoke at the HRC fundraising gala and currently the HRC website declares, “President Obama underlines his unwavering support for LGBT Americans.” The vast amount of organizing resources the HRC wastes on their false alliance with the Democratic party leaves radical queers on the margins to fend for themselves. Our struggle has always had to resist the repression of conservative tendencies in government and society to gain liberation in our lives.

The gourmet affair was sponsored by 48 corporations including giants Lockheed Martin, Microsoft, and Wachovia Bank. At $250 dollars a plate the HRC served our movement a rich, white, heternormative atmosphere that purposefully excludes working class queer folks.

REMEMBER THE STONEWALL RIOTS! On the 40th anniversary of Stonewall, pigs raided a queer bar in Texas, arrested and beat our friends, and we looked towards politicians and lawyers to protect us. This mentality is what keeps the money flowing to the HRC and their pet Democrats, and keeps our fists in our pockets.

Most of all we disagree that collective liberation will be granted by the state or its institutions like prisons, marriage, and the military. We need to escalate our struggle, or it will collapse.

Posted by Unknown at 7:32 PM
Email ThisBlogThis!Share to TwitterShare to FacebookShare to Pinterest

If I were HRC and caught the glamdals, I wouldn't leave their behinds: Their behinds would be behind bars.

That's a video camera hanging in the upper left near the corner of the entryway roof. Was it working? Who has the video?

When I saw this, I cheered. I love you glamdalizers. (and also for the record, I too was in San Francisco, it wasn't me I swear!) QueerToday.com organizers support challenging and even disrupting HRC's usual business.

These "glamdals" have accomplished NOTHING politically on their own. What advancements for gay rights can they claim? Nothing! What are they going to do next? Trash Elton Johns Rolls? Throw a pie in Solmonesese's face? They are lazy and self delusional.

They will be about as effective towards political change as the Symbionese Liberation Army, hopefully without human sacrifice.

I hope someone keys their cars. See what it feels like.

Oh dear dear dear. It must have been one or more of those people Joe Solmonese classified as politically unaware. Boo hoo.