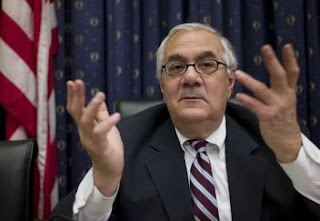 Barney Frank Gets 'Hell' on Castro St
For Gay March 'Grass' Remark
I'm sometimes quite old-fashioned in digesting the news because I still read newspapers on dead tree. Today I didn't get around to reading the fabulous Leah Garchik's gossip column in the San Francisco Chronicle till a short while ago, while I was medicating. This item gave me a few laughs, and I'm sure all the folks pissed at the Congressman are gonna like it too:

Strange de Jim reports that when Barney Frank toured the Castro with pals on Sunday, he got hell from a few locals for dissing and not appearing in the National Equality March for gay rights in Washington. He'd been quoted as saying, "The only thing they're going to be putting pressure on is the grass."

Posted by Unknown at 5:46 PM
Email ThisBlogThis!Share to TwitterShare to FacebookShare to Pinterest

Did he say the same thing about the Million Man March? Doubt it.

Hey- the Dems are in power- they want to have $1000 a plate fundraisers with fatcats.

This is what you get for blindly voting Democratic. Kill the incumbent in the primary, don't show up to vote- or hell, even vote for a moderate Republican.

it irked me when he made the comment but, sad to say, it turns out he was right. the low turn-out for the event (let's be honest about the numbers), when washington was out-of-town for the holiday weekend anyway, plus the glaring lack of media coverage made for what was pretty much a waste of time and resources.
if the high point of the day, as it apparently was for so many, was lady gaga's tirade then we did a better job at trivializing our issues than barney had even imagined.

Yelling at Barney in the Castro doesn't change the fact that he was right. Someone on Facebook last week said to me, "Isn't marching itself a form of lobbying?" No, it isn't. If you actually want to get bills passed, you need to learn and work the system--and, btw, stop pretending that we haven't accomplished anything in the past 30 years. I hate to break it to people, but the LGBT movement does not begin and end with HRC. The griping accomplishes little. Find a group you like or start your own and support its work. But just standing in the street and demanding all or nothing right now is petulance, not serious activism.

One thing I can never understand, which is:
Democrats/liberals/progressives have established 'minority victimsgroups'.
The reason being to make them look like they care for the oppressed. But far from it; For them people are nothing but voting blocks; used for re-elections only to throw them under the bus when tehy don't find them useful any longer.
What does it take for people to wake up, and allow dems to use them in such a shameful way?
(disclosure: I do not vote; lean more to be conservative but not republican)

Barney always speaks his mind, based on decades of experience. He knows what influences Congress and he has concluded that marches on holiday weekends have zero effect on how members vote and which bills they champion. As to influencing the executive branch, it seems to me the influence was done in June when Obama got a rude wake-up over the DOMA brief filed by the Justice Department, and he has been trying to make up ground ever since. Did he agree to speak at the HRC event because of the march? I doubt it. Did the HRC event draw much more national media coverage for our issues and the president's public commitment to them than did the march. You bet! Was Barney's observation correct? Yeah.

Benedict Barney Frank had a point about pressuring the grass on the West Lawn. But only because he recognized the march as posing no threat to the Democrats. Marching alone won't do that. You have to make DEMANDS, SET DEADLINES, AND TELL THE DEMOCRATS YOU WON'T VOTE FOR THEM IF THEY DON'T PASS OUR AGENDA BY THE DEADLINE. Had these things occured, Barney would have sung a different tune.

What Barney doesn't like is direct action and anything that challenges his hegemony as insider wheeler/dealer. Barney was livid when Gavin Newsom issued those marriage licenses, one of the good things done by a Democrat.

Gavin Newsom's 2004 stunt has cost us millions of dollars, millions of hours of peoples' time, and a constitutional amendment banning same-sex marriage in California. California gay politicos were on a legislative course, and actually got two same-sex marriage bills through the state legislature, which Schwarzenegger then vetoed on the ground that the issue was pending before the courts. Well, the issue would not have been pending before the courts had not Newsom acted...

It's actually quite convoluted to try to describe the entire marriage situation in California, but to my way of thinking Newsom's stunt was counter-productive and helped to produce the backlash that led to Prop 8.

But that's off the point. Barney has stated repeatedly that he believes you need direct action, you need lobbying, you need to keep pressure on public officials to do the right thing, and you need lawsuits. The precise combination of these things to gain any particular political objective can be debated, but you need all of them. And the view he has articulated on the current gay legislative agenda in Congress is that the most effective way to achieve it now is intense lobbying of those members "in the middle" on gay issues who, when added to our supportive base (which is almost entirely made up of Democrats in both houses), will give us our veto-proof majority in the Senate. (As long as we have a substantial Democratic majority in the House, we can probably pass our agenda through the House.)

Sure, Barney isn't perfect, and he sometimes makes colorful comments that he should have kept to himself. In retrospect, it seems the march was much smaller than organizers were hoping, and from my students who went, I get the impression that the overwhelming bulk of the crowd was college kids. It would be great if those college kids are mobilized to do heavy lobbying of their home state senators. Then we might get DOMA repeal, DADT repeal, and the rest of the agenda through Congress.