Rain on Cleve's March?;
NYC's Quinn May Be Zapped? 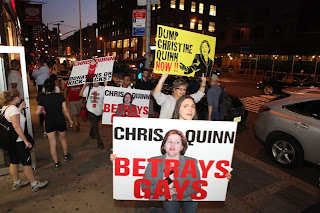 (A recent picket organized by gay New York voters and activists in Manhattan. Might we see a similar picket in DC on Sunday?)
It may get a little wet at Cleve's march this weekend in DC. The Weather.com site predicts a few showers for Sunday's march and rally. You can track the weather forecast for October 11 in DC here.

A letter from Donny Moss, a gay New Yorker critical of openly lesbian NYC City Council Speaker Christine Quinn, was circulating over the weekend and is shared below. He says he's been in touch with folks who may zap Quinn during her DC appearance, for a variety transgressions enumerated in Donny's email.

The light bulb lit up when I read how under Quinn's leadership, not a single bill has been introduced, or passed, since she took over as Speaker. I can't recall a single story about Quinn using her powerful position to advance equality and liberation for gays in NYC, can you?

This is Donny's message to other activists:

The National Equality March organizers have invited Christine Quinn to be one of the official speakers (Oct 11). I sent the message below to the organizers, [...].

While I have spoken to a few NYers who are thinking about protesting her at the March, I have also spoken to several who decided not to attend the March when they learned that Quinn was invited to speak. If you decide to send your own message, please consider including that point, as the organizers should know that one of their speakers is keeping people away.

Here is Donny's letter to the march organizers:

On behalf of the many LGBT New Yorkers who have come together over the past few months to expose the truth about Christine Quinn, I hope you will consider rescinding your invitation to her so that we can attend this March as participants instead of protesters.

Given Christine Quinn's appalling record on LGBT issues since becoming Speaker of the NYC Council in 2006, why would the NEM organizers invite her to speak to the community?

Is Christine Quinn going to address the fact that she was virtually silent when middle-aged gay men in her district were being falsely arrested for prostitution? She only called a meeting when the victims threatened to hold a protest at the Mayor's house, a move that would embarrass her. And she didn't even bother to show up. Why didn't she help? It was more politically expedient for her to ignore the gay victims than to speak out against the NYPD's vice squad. This was an alarmingly weak response from someone who is gay, former head of the Anti-Violence Project and Speaker of the City Council.

Is Quinn going to explain why she refused to endorse even one LGBT candidate for NYC Council in the recent election? Thankfully, capable gay candidates did win, in spite of the fact that she worked against them because it suited her politically.

Is Quinn going to explain why she rubber stamped an NYPD rule (with no public debate) making it illegal for groups of 50 or more to assemble in public without a permit? Freedom on assembly is vitally important to the LGBT community and is a constitutional right that helped put her into power in the first place.

Did you know that not even one LGBT bill has been introduced at City Hall since Quinn became Speaker?

As you will see in the fact sheet below created by the NY Association for Gender Rights Advocacy, Christine Quinn has turned her back on the LGBT community time and again to advance her political career, which is one of the reasons why many of us have and will continue to protest Quinn at her public appearances.

In public, Christine Quinn waves a rainbow flag at Gay Pride and pumps her fists at marriage rallies. In fact, she leverages her sexual orientation at every turn, except when she's being exposed for corruption. In private, she works against our community when it serves her politically. Your invitation to Quinn gives people the impression that she is a positive force in the LGBT community, when she is, in fact, a detriment.

Click here to read the site devoted to holding Quinn accountable. And here are excerpts of what the NY Association for Gender Rights Advocacy had to say about Quinn:

–– As Speaker of the New York City Council, Christine Quinn declined to take the administration to court over the New York City Department of Education’s refusal to fully implement the Dignity in All Schools Act (DASA), enacted over Mayor Michael Bloomberg’s veto in 2004; instead, Quinn collaborated with the mayor’s office and the Department of Education on Respect for All, which has proven completely ineffective in addressing the epidemic of bullying and bias-based harassment in NYC public schools. [...]

–– The Speaker has collaborated with the mayor’s office in blocking the Human Rights GOAL bill (Int. No. 731), which could have a potentially significant impact in addressing discrimination based on sexual orientation and gender identity or expression faced by members of the LGBT community in New York City as well as discrimination faced by women, people of color, people with disabilities and others. [...]

–– The Speaker has done little to address the problem of police harassment and the false arrests of gay men, other than a limited one-time intervention, and then only after significant media attention threatened to embarrass her office.

–– Last but not least, the Speaker pushed through a term limits extension bill that will help Bloomberg win a third term, after two terms in which he’s vetoed every LGBT-specific and LGBT-inclusive bill that’s come to his desk (the Equal Benefits Bill and DASA above all), except for the transgender rights bill (which he had no real choice but to sign, since it passed by a veto-proof margin of 45-5). In pushing through Bloomberg’s term limits extension bill, Quinn must accept responsibility for Bloomberg’s third term, including the record that he will accrue on LGBT issues in his third term, should he be re-elected.

This message was signed by Pauline Park, chair of the NY Association for Gender Rights Advocacy. Many thanks to Donny Moss and Pauline for educating me about the full picture of Quinn and her political agenda, one that doesn't appear to have done all that much for gay people.
Posted by Unknown at 10:04 AM
Email ThisBlogThis!Share to TwitterShare to FacebookShare to Pinterest

Thank you, Mr. Petrelis, for this important post. You are doing the queer community a great service by exposing Christine Quinn.