ME, WA Copying Losing CA Prop 8 Imagery?
I saw the image above over at Pam's House Blend yesterday, and it got me thinking about how the pro-gay side in the marriage battle up in Maine, the No on 1 campaign, excludes images of people, while the anti-gay forces, the Yes on 1 campaign, shows four people, two adults and two children. Here are two other stock images from the Yes side in Maine that I found on the web:

Notice that both images feature the four people stick figures, which, I believe, sends a "our campaign is about people" message to voters. Also, the use of yellow sure gives off a sunny, wholesome feeling. Now compare the Yes images with the primary No side's illustration, appearing on many gay blogs: 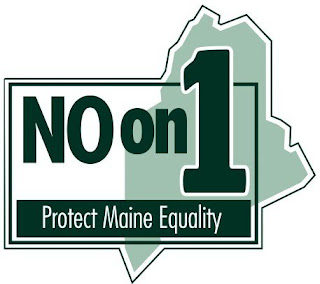 Not a single image of any human stick figures and the use of the dark and medium shaded greens don't register as upbeat and optimistic to me. Notice that our side omits the word marriage while the other side uses the word? Comparing the dueling web ad images from Maine this weekend reminded me I did a similar comparison with the Prop 8 imagery in 2008. This was what the pro-gay side used: 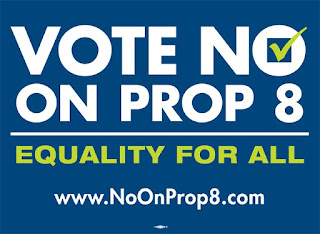 Your basic dark background, heavy message kind of political sign and not a single image of any human stick figures. Now cast your eyes upon the Yes side's winning sign: 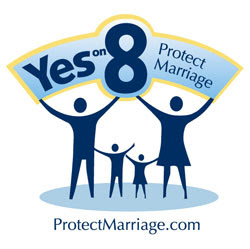 Much brighter coloring overall, good use of yellow bordering around the Yes message and four human stick figures. Says to me their campaign is about people and isn't just some theoretical argument about vague equality for all. Heck, our opponents here in CA didn't shy away from the marriage word, whereas the gay leaders omitted it from our signage.

What about up in Washington state? What kind of image battle do we find? Here's the pro-gay side's web ad: 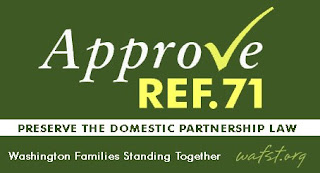 To my eye, I see dark background echoes of the losing CA ads and a similar check mark is used on the first line of text. However, unlike the CA and ME ads that avoid addressing the issue at hand, marriage, the folks in WA include the topic before voters, a domestic partners law, in the image. I wish the WA leaders went one step further and illustrated their sign with some human stick figures. This is the anti-gay side's sign: 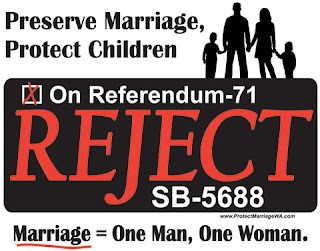 The use of dark red and black colors isn't as uplifting as the anti-gay ads in CA and ME, but notice the use of the human stick figures, sending a visual message the referendum is about people and not just a law.

Let's hope the voters in WA and ME reject the ballot efforts to turn back gay marriage and domestic partner protections, and that the signs and web ads created by our sides are more successful than their counterparts in CA last year.
Posted by Unknown at 4:28 PM
Email ThisBlogThis!Share to TwitterShare to FacebookShare to Pinterest

Michael, I'm in Maine right now ... and you don't know what you're talking about. Sure, if all you look at is the logos your argument sounds persuasive. But go watch the "No on 1" ads. It's all about people, and each and every one of them are real Maine residents.

So the "Yes on 1" side has a photo of a family?? Too bad it's just stock imagery.

I love your blog, but you are completely off base on this post. First off, when you visit the No on 1 website, you see multiple color photographs of real human beings, not stick figures. These are real Mainers, not models from a stock photo as is used on the Yes on 1 site. Moreover, there are multiple gay families right on the first page of the website.

Second, to date No on 1 has run 4 TV ads and No on 1's allied groups have run 1 TV ad. So that is 5 TV ads in all. Of the 5, real gay families from Maine have appeared in 4. The 5th ad involved a father - a real Mainer - talking about his gay daughter.

I don't think you can fairly say that No on 1 is following in the steps of No on 8. So far, it has pretty much been the opposite of No on 8.

And BTW, no one in the No on 1 camp went on vacation to Spain or Alaska this summer. :-)

If I may add one other thought: While the Maine folks have to date shown themselves to be focused, nimble and competent, the people in WA very much remind me of No on 8. First, they screwed up the petition review process, allowing the referendum to get qualified when it shouldn't have. Then they filed litigation, but left out the best arguments for tactical reasons. Then they lost and decided not to appeal.

Since then, they have lined up just about every interest group and political force in WA as allies, but they aren't doing well in the polls. Two polls show them winning, but within the margin of error. And this is despite the fact that their opponents have no money, no significant endorsements, and no army of Mormons to count on.

IMO, if you are looking for a Prop 8-revisited story to cover, WA is the place to look, not Maine. If we lose Maine, it will not be because of incompetence.

thanks for sharing your thoughts.

to paul hogarth, my reply is, yes, all i looked at were the web ads, and i said so. my piece is NOT about the TV spots, which may prove to be very effective at persuading voters to side with gay people in the maine battle.

and i'm happy to read that unlike CA leaders in the prop 8 battle, no maine leaders are taking vacations in the middle of the election fight.