What's the Good News on My Castro Supervisor Campaign?

It's been a while since I provided supporters, potential voters and my friends and family members with an update on my campaign for the District 8 seat on the Board of Supervisors, and I have nine bullet points of good news to share. 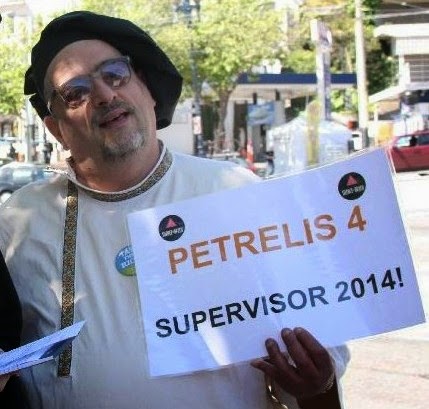 First, on the personal level I am pleased to say that my recent health troubles have mostly subsided and my wellness is almost back to normal. As part of my AIDS cocktail, I no longer take Combivir and have switched to Truvada, while my physician at UCSF Dr. Susa Coffey has put me on a high blood pressure drug and I'm feeling much improved all over.

Second, I've enjoyed the hours and hours spent listening to Castro area voters and other San Francisco voters about their disapproval of the incumbent Supervisor. Many folks are scared that their rental housing could be jeopardized and that the economic disparities are not a concern of the incumbent, his downtown business and real estate supporters. People want to hear about solutions to create affordable housing stock and getting the tech industry to pay it's fair share of taxes.

Third, the chats with two other potential District 8 challengers, nudist and public access advocate George Davis and young Simon Timony who gained fame protecting a Muni transit vehicle during the riots after our SF Giants won the World Series, were quite enlightening. We're hoping to sit down together after the June 10 filing deadline and strategize and coordinate our plans for the campaign season.

Fourth, we learned the disappointing news this week that longtime housing rights advocate and fierce lesbian Sara Shortt decided to not run. With her vast knowledge of affordable housing concerns and laws governing rent control and protections for renters, she would have really given the incumbent a run for his money, much of which comes from condo developers.

Fifth, I blogged this week about gay lawyer David Waggoner, who successfully defended Sheriff Ross Mirkarimi after he was charged with battering his wife and other crimes in retaining his elected position, pulling papers to potentially become a District 8 candidate. No word yet if he finally got off the fence and is now running.

Sixth, supporters have continued to make donations to this political effort of mine and I'm very pleased to report that my campaign bank account has enough in it to pay the $500 filing fee to the Department of Elections to get on the November ballot. Please make a contribution today via PayPay.com using this addy: Petrelis4Sup2014@aol.com. Send checks to: Petrelis 4 Supervisor 2014, P.O. Box 14943, San Francisco, CA 94114.

Seventh, after visiting the Department of Elections at City Hall yesterday and verifying that I have more than the required minimum number of District 8 voter signatures on my nominating papers, I continue to gather signatures as part of my commitment to engage with voters and supporters on the streets.

Eight, my life-mate and hus-bear Mike Merrigan will be filing my paperwork and paying the processing fee to the Department of Elections on Monday, a day ahead of the deadline for all candidates to turn in their papers and payments.

Nine, good friend and activist Todd Swindell is doing a terrific volunteer job of maintaining our campaign Facebook page here: https://www.facebook.com/petrelis4supe8. Be sure to like it and spread the word about it.

It's been six months since I tossed my chapeau into the political ring and I feel I've won so much already. Things such as meeting voters, listening to their worries and hopes, rekindling old political and personal acquaintances, receiving encouragement from local and global pals and family back East, while learning the ropes of how to run for office in San Francisco have all contributed to a renewed sense of surviving and thriving as a 55-year-old gay man and activist.

Thanks everyone, for your support and love!
Posted by Unknown at 10:16 AM
Email ThisBlogThis!Share to TwitterShare to FacebookShare to Pinterest