For gay men of a certain age who lived through the AIDS plague years, I have certain expectations of them especially if they're an elected official or the executive director of an advocacy nonprofit or in rare cases both. They should be active in addressing health hazards at public spaces. 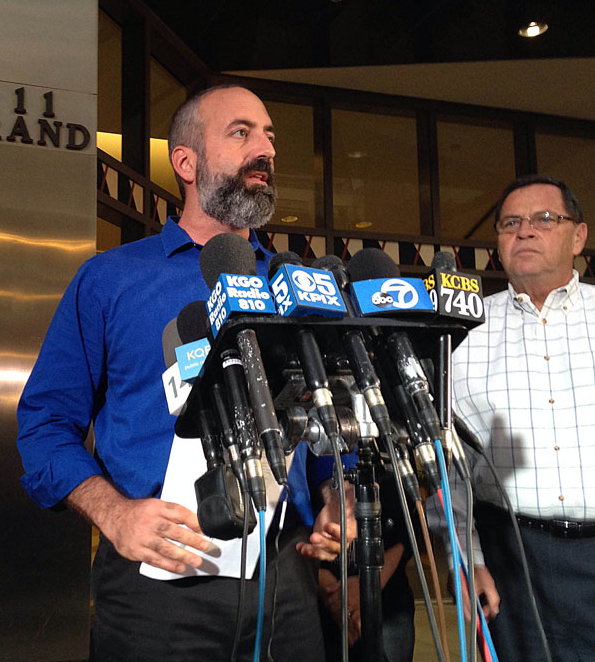 Tom Radulovich, behind the mics, whom I've been acquainted with for many years, is one such gay man. Since 1996, I've voted for him as a member of the BART board of directors but a future vote if he runs again is unlikely given his silence this week about the deplorable unsanitary conditions at the 16th and Mission BART Plazas, which are in his portfolio.

It's not just that he's ignored the health hazards I've brought to his attention and his lack of response to my questions to him that concern me, but also the fact that the filthy situation at the plazas has existed for quite some time under Tom's watch. Why has he allowed the filth to reach this sorry state?

But he's not only a BART director but also works as the executive director of the Liveable City organization where part of the agenda includes the following, bolding in the original text:

[C]reate great stations that provide efficient and accessible transit connections and great public spaces that serve as centers of community.


Hello, Tom? Take a good look at the 16th Street Plazas and tell me how Liveable City has addressed the station and public spaces there, please. Nice words, but where's the action?

While he's not responded to my questions, I did hear from his Liveable City colleague Susan King, whom I've also known for years, and she wrote to me on Tuesday saying:

Tom's been in City Hall all day for the Board [of Supervisors] hearing on the CEQA [environmental standards] appeal of repealing Sunday Meters. We have a number of meetings tomorrow during the day but he should be more accessible tomorrow.


I thanked Susan for her note and unfortunately didn't hear from Tom. However, I've received replies from Kenneth Duron, BART's district secretary, the first came on Saturday:

Your email will be shared with Director Radulovich as requested. A copy will be provided to the Maintenance and Engineering Department for investigation and response.

Members of our Operations group, Police Department, and office of External Affairs have been advised of your inquiries of Director Radulovich. By copy of this email I will ask that a member of staff contact to provide you with the contact information you seek [for who is handling requests for cleaning].


I passed through the 16th Street plazas yesterday and the health hazards I documented and blogged about here, were still very much present.

All of the stakeholders and users of the plazas, from the low-income residents of nearby SROs and homeless people and techies and tourists to every BART rider or Mission neighbor, deserve plazas that are sanitary and regularly cleaned, and monitored by the BART director responsible for their upkeep.

Tom Radulovich, your silence is harmful to the public health. Please speak up and answer my questions.
Posted by Unknown at 10:20 AM
Email ThisBlogThis!Share to TwitterShare to FacebookShare to Pinterest