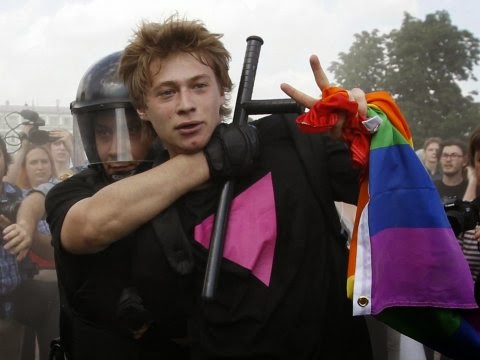 (A peaceful gay protester being assaulted by a police officer in St Petersburg in August.)

The signs about these actions have appeared on utility poles in several neighborhoods, impressing me that the organizers have used such an old-school street outreach tactic to build awareness in addition to creating a Facebook page.

Toni Mendicino, one of the leaders of the solidarity actions, emailed me seeking attention for the events and soliciting my participation. Unfortunately, I have scheduling conflicts so I can't make the actions but Toni is coming over to our apartment on Friday to pick up the LGBT Russia signs, an enormous rainbow flag and the bull horn that Gays Without Borders is loaning her.

Here are the details on the actions, that encourage everyone to attend, or, afterward share the reports and fotos on your social media pages and outlets from the events, all of which happen in San Francsco. Many thanks to the folks who've pulled together these actions! From the release:

Bay Area community activists are holding actions demanding queer and civil rights in Russia and in solidarity with targets of escalating repression on the opening days of the 2014 Winter Olympics in Sochi, Russia. Events include:

-- 12 pm to 1 pm: A picket at the Russian Consulate,  2790 Green St. (at Baker), featuring chanting and speeches by Amnesty International, Radical Women, Federation of Gay Games, Team SF, Freedom Socialist Party and others;

-- 11:00 am to 1:00 pm, Rally at UN Plaza, 7th and Market Streets, in solidarity with Russian LGBTQ people and in defense of human rights at home and abroad.


Initiated by: Bay Area Freedom Socialist Party and the Federation of Gay Games—Team San Francisco. For more information contact Toni at 415-730-2917 or Masha at 415-678-8232 or email: maketheworldbetterSF@gmail.com.
Posted by Unknown at 10:18 PM
Email ThisBlogThis!Share to TwitterShare to FacebookShare to Pinterest