I'm hard pressed to think of another recent year where I had so many excellent film experiences. The last twelve months have offered a wealth of cinematic treasures, old and new works, and it's been one pleasurable time recalling what unspooled before my eyes in theaters around the Bay Area. My best films of 2013 list starts with a tie.

"Gravity" took me out of this world and pushed cinematic boundaries that astonished my senses. As astronauts lost in space trying to return to Earth, Sandra Bullock and George Clooney underplayed their roles and blended so well into the tapestry of the stunning visuals. Due to vision problems with my progressive bifocal glasses, I skip seeing anything in 3D, and seeing this movie in 2D was still a magnificent thrilling odyssey. Before it leaves theaters, I'll see it again. 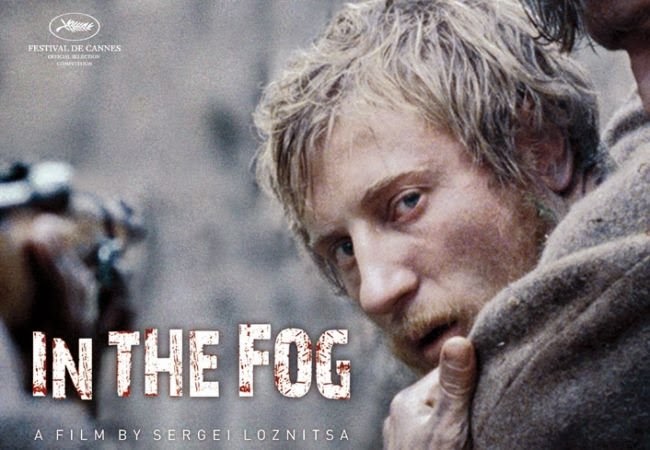 The more down to earth, and literally grounded in the muck of wartime Russia, and gripping "In the Fog" will one day play the Pacific Film Archive and I plan to be in the audience, and recognized for the masterpiece that it is. In 1942 the Nazis occupy Belarus and locals resist or collaborate in their terror, with many muted shades of morality played out in the narrative and look of the film. Stately composed long takes put us in the center of dilemmas of those who resist the Germans. Comparable to Elem Klimov's classic World War II drama "Come and See", that and "In the Fog" would make for a dynamic double-bill.

Here are my other favorite movies listed alphabetically.

"American Hustle": The latest critically-lauded and awards-laden work from David O. Russell is a riff on the Abscam scandal in New Jersey in the 1970s. As a Garden State native, I wish the state wasn't cultural and political short-hand for corruption. Terrific acting from all, with a terrifying cameo by Robert DeNiro, fabulous production, costume and false hair designs, and very satisfying narrative and ending with the small time con artists putting a big one over on the feds. 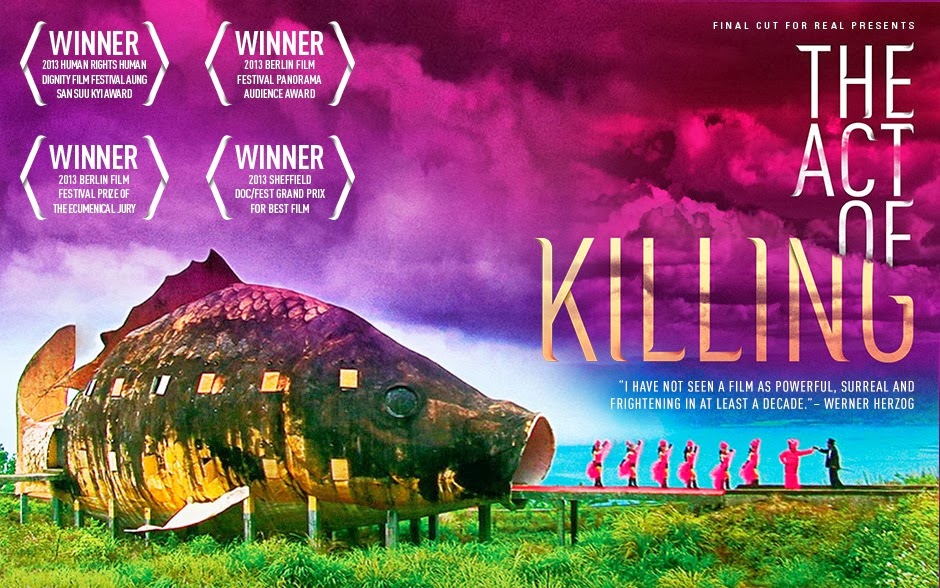 "The Act of Killing": This chilling documentary from Josh Oppenheimer, nominated for an Oscar, profiles the unrepentant death squad leaders in Indonesia responsible for murdering countless enemies of the ruling junta in the 1960s. The killers happily recreate their crimes against humanity for the filmmaker, as they enjoy normal lives at retirement-age and even a smidgen of justice is infuriatingly denied. Glad I saw it with friends and had a discussion afterward to process my emotions about the shocking inhumanity of the killers.

"Beyond the Hills": Romania's fantastic New Wave continues to produce intelligent and challenging movies with this work from director Cristian Mungiu. A hard-luck young woman returns home from working abroad to visit her friend from childhood together in an orphanage and who now lives in a remote orthodox convent. Conflicts arise between them, leading to many spiritual questions and a bleak, fatal crisis told with grand camerawork and editing.

"Blue is the Warmest Color": The controversial lesbian-theme French film by Abdellatif Kechiche follows a young woman finding her way in the world, as she navigates her same-sex desires and occasional interest in men, gained notoriety because of an extended graphic lesbian sex scene. An engaging story for all audiences of all ages and stunning acting from the leading actresses. The one movie I saw last year with hand-held, shaky cinematography that usually drives me out of the theater.

"Frances Ha": Shot in luminous black-and-white, with a beguiling Greta Gerwig as a late twenties New Yorker trying to get a direction in life, couch-surfing with friends, lacking a serious romantic interest and no steady income. Director Noah Baumbach has a great eye for fabulous production design. This had the fizz of a 1960's French New Wave flick, greatly enhanced with music from the period by Georges Delerue and a sly homage to Truffaut. What's not to love? 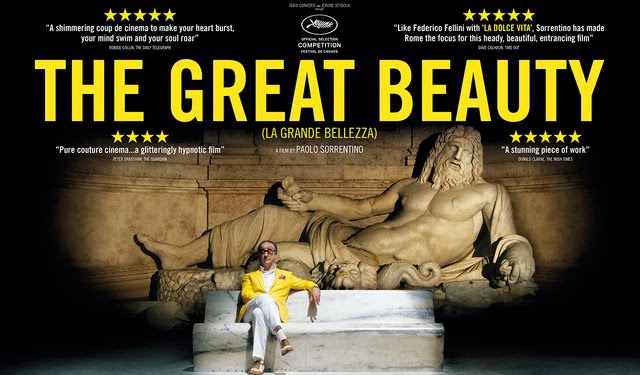 "The Great Beauty": A valentine to Rome's architecture and urban design, high artistic ideals and classic Italian cinema, swooping and elegant camerawork,not to mention a stand-out performance by Toni Servillo combine to make a film of, well, great beauty. He plays a celebrated writer roaming the city's nightlight, trying to be inspired to pen another masterpiece. Stay for the final credits and revel in the stunning long-take. Should win the Oscar for best foreign language film, if the Academy voters are smart this year.

"Laurence Anyways": A 24-year-old gay French-Canadian director and multi-talented prodigy, Xavier Dolan, delivered an occasionally over-the-top tale about a transgender queer male-to-female teacher and her decades of bonding with her BFF, a straight woman. Much more than boring identity politics, the film is a life-affirming work that would have found an theatrical audience if the distributor hadn't released it on Friday of Pride Weekend in NYC, SF and other key markets.

"No": From Chile, this Oscar-nominated film starring Gael Garcia Bernal fictionalized an advertising executive's winning ballot campaign in the 1980s to deny dictator Pinochet another term as president. With a drab palette, it captured the lingering political resentments and hopes for a future with democratic reforms. This is how you make cinema about politics that is also entertaining and contains terrific acting. A challenging film with sub-titles that found its American audience.

"Prisoners": Another well-shot film with cinematography by one of the modern master directors of photography, Roger Deakins. An allegory for American torture abroad and the rights and abuses of prisoners, Hugh Jackman is a father whose daughter's kidnapping unhinges him as he seek revenge wherever he can find it. The ending didn't neatly wrap up the narrative and a large unanswered question left the audience with a lot of uncomfortable issues to discuss. 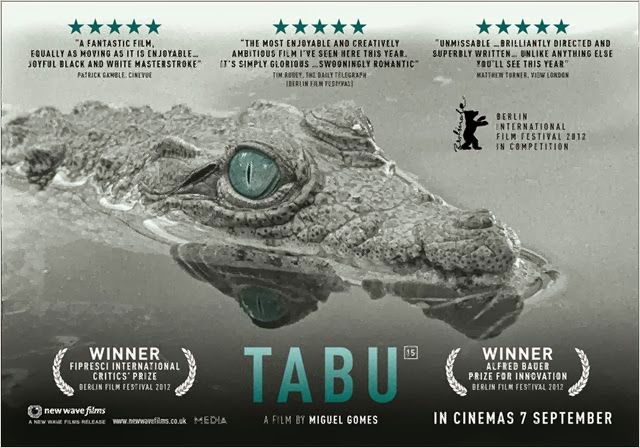 "Tabu": Told in two-parts, the first half is about three women in contemporary Portugal including an elderly Aurora looking back on her life and the second part is set in colonial Africa showing the younger days of Aurora. Lots of long takes with a steady camera gaze, shot in beautifully shaded grays that only black-and-white film can capture. Wonderful mix of well-drawn characters, low-key humor and romance. Played once at the Pacific Film Archive and should have had a one-week run at the Opera Plaza Cinema.

"Twelve Years: A Slave": Groundbreaking and lie-busting true story of a free Northern black man, Solomon Northrup, kidnapped and sold into slavery to work on Southern plantations. Every element of the direction, acting and screenplay brought home the horrors of America's degradation of black people as property in the 1840s. Chiwetel Ejiofor was remarkable as the lead and his Oscar nomination is more than well-earned and deserved. Ditto for director Steve McQueen. My pick for best film at the Oscars.

What were your top films of 2013?
Posted by Unknown at 5:08 PM
Email ThisBlogThis!Share to TwitterShare to FacebookShare to Pinterest