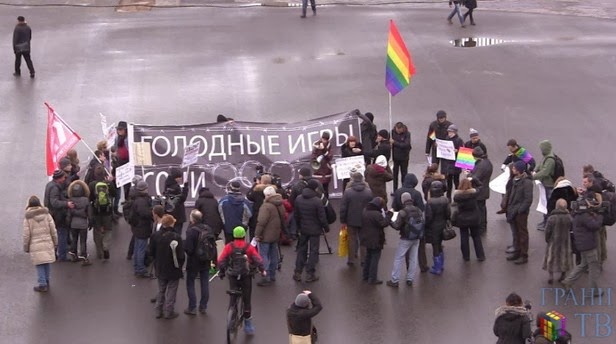 Such queer bravery by a handful of peaceful activists, putting themselves out on the streets of Moscow with bright, visible LGBT symbols and easy to read to signs in Russian, with hostile agitators expressing their opposition to gay liberation and uniformed police officers to end the rally, and with various cameras recording it all, needs the attention of American and global activists.

I'm cross-posting from Ruslan Porshnev's fantastic QueeRussia news portal, a true asset in English that you should be reading regularly, this incredible story in text and video. I salute the activists who organized and participated in this action. Bravo!

On February 15, about 50 people attended a sanctioned rally against corruption and repression in a ‘Hyde Park’ zone located inside the Gorky Park, Moscow. Participants waved rainbow flags, held a banner saying “The Sochi Hunger Games 2014″ , as well as posters in support of LGBT rights, ecologist Eugene Vitishko and prisoners of May, 6 (‘Bolotnoye’ case).

Police tried to ban the posters against the Olympics, insisting that the Olympics is not related to corruption and repression which was the declared theme of the rally. Police threatened to disperse the rally and to arrest participants, so the posters about the Olympics  were put away by the decision of the organizers, about 40 minutes after the rally began.

A number of Orthodox activists, who were allegedly accidentally passing by,  also demanded the police to remove LGBT symbols from the event,  but the police did not mind the rainbow flags, Grani.ru reports. In a press release posted prior to the event organizers said:


The government has spent $50 billion to host the Winter Games in Sochi – they will become the most expensive Olympics in history! This amount could be spent on building 500 modern medical centers or five thousand schools. Big business and officials make profits on kickbacks, but for the locals there is unemployment or slave labor, demolished houses and destruction of nature. [...]

Sochi ‘kickbacking event’ is not an international holiday, this is Russian “Hunger Games.” The real players here are political prisoners, powerless migrant workers, LGBT, poor pensioners, residents deprived of shelter. But they lose, this carnival is not for them.

There is no freedom and no holiday! There is a cause for joy only when we achieve the abolition of all repressive laws and set activists free, when the majority will win a real opportunity to address issues of political structure in Russia and dispose of its wealth.

Posted by Unknown at 12:19 AM
Email ThisBlogThis!Share to TwitterShare to FacebookShare to Pinterest