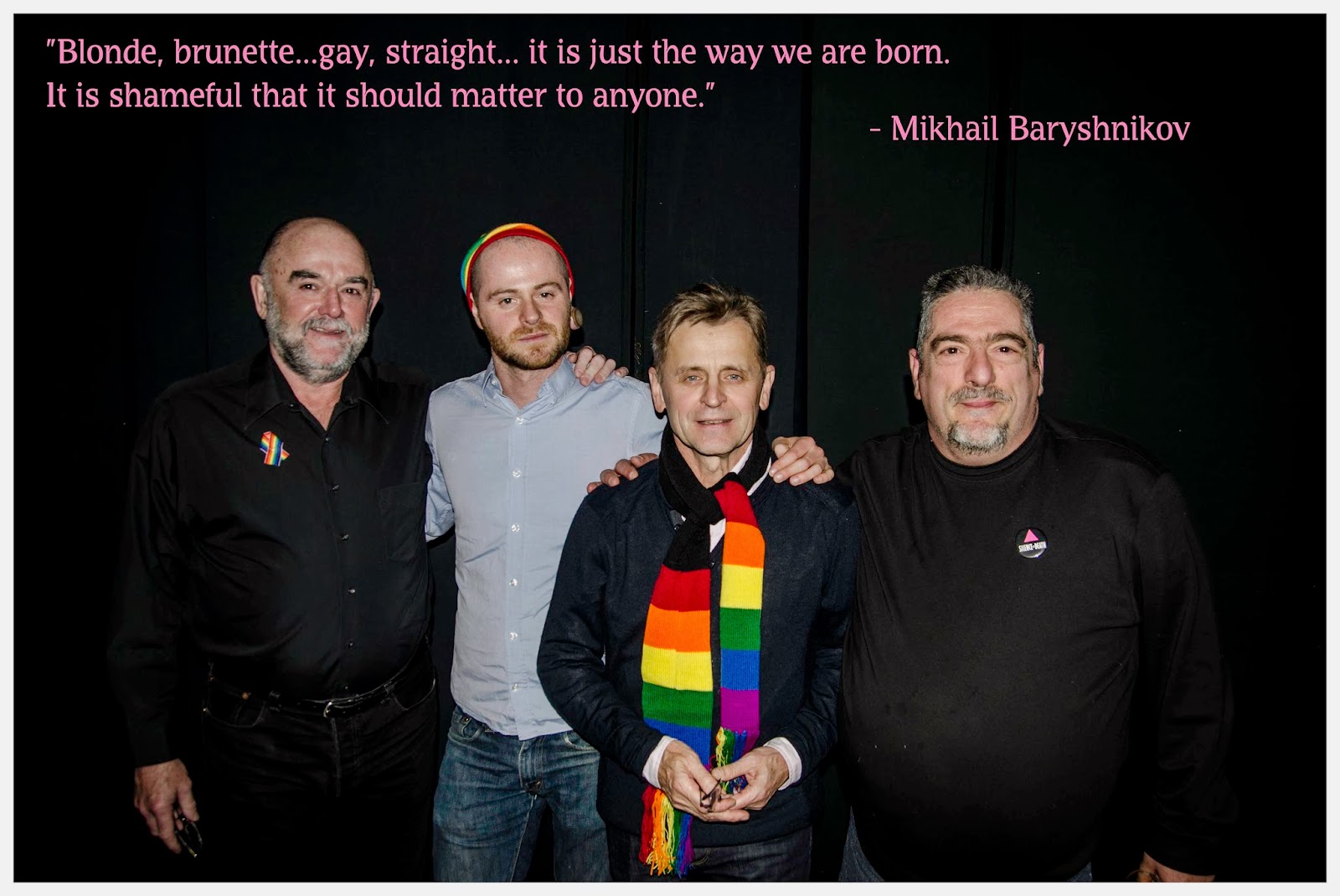 (From the left, Michael Merrigan, Robbie Sweeny, Mikhail Baryshnikov and Michael Petrelis.  Free use of the photo is granted, as long as credit is given to Gays Without Borders and Boycott4Russia. Click the pic to enlarge it.)

The legendary dancer, actor and cultural icon Mikhail Baryshnikov on Sunday, February 2, met with three gay activists and was photographed wearing an LGBT rainbow scarf as a visual expression of solidarity with LGBT people.

Baryshnikov is appearing at the Berkeley Rep with a fantastic touring production of "Man in a Case", based on short stories by Anton Chekhov, and after the matinee performance he graciously gave his time to the activists Michael Merrigan and his life-partner Michael Petrelis, both of whom are with the Gays Without Borders activist group, and Robbie Sweeny who operates the Facebook page Boycott4Russia.

After introductions were made, Baryshnikov directed everyone to a backstage black curtain and said it would be a terrific background for the photo. Sweeny thanked him for agreeing to participate in showing support for gay Russians. This photo-op was at the initiative of Sweeny. Petrelis asked if he wanted to don the rainbow scarf he was wearing, Baryshnikov readily said yes and soon the international symbol of LGBT liberation and pride was tied around his neck and displayed over his chest.

The activists stood on both sides of Baryshnikov and pictures taken.. Not pleased with the images, Baryshnikov instructed everyone to smile again for the camera and more pictures were snapped. Everyone liked the new images and the activists gave the rainbow scarf to him.

During a brief chat about the plight of LGBT people struggling for dignity and repeal of an anti-propaganda law, he spoke with dismay about the discrimination gays face and how it's wrong and irritation to judge people based on sexual orientation or other personal characteristics.

Baryshnikov said: "Blonde, brunette ... gay, straight ... it is just the way we are born. It is shameful that it should matter to anyone."


Once a round of hugs was over, as everyone put their jackets and hats on, Baryshnikov said he was throwing away his grey knit scarf because he was going to wear the gift. Later on, as Sweeny and Merrigan were waiting on the BART platform a train back to San Francisco, Baryshnikov and his acting colleagues came along to catch that train. Looking quite dashing, he had the rainbow scarf wrapped over his shoulders.

"On behalf of the Queerussia project I would like to express my deep gratitude to Mr. Baryshnikov on his continuing efforts of supporting LGBT people. It is sad to realize that Russia, known for its enormous cultural and humanistic legacy of the past, now, in the 21th century displays examples of inhuman messages to the world in the form of anigay laws and violence. We are grateful that Mr. Baryshnikov and other renowned persons of art do not remain indifferent to our fate and inspire us to go on with our struggle for human rights and equality."

In addition to thanking Baryshnikov, the activists also express gratitude to Katie Ichtertz for her coordination with Sweeny, and to the Berkeley Rep associates for their assistance in guiding this project to reality.
Posted by Unknown at 10:19 AM
Email ThisBlogThis!Share to TwitterShare to FacebookShare to Pinterest

Excellent - one more Mensch to add to a vital list.

Meantime I'm sure that by now you have seen the speech of the Irish drag queen Panti at the Abbey Theatre on why the Irish were craven to berate his use of the word 'homophobia'. If you haven't, do so immediately.