A cineaste acquaintance last month told me about the rehab work supposedly happening at the old Mission Theatre in San Francisco, and it was the first I heard about transforming the long-closed and decrepit movie palace in my neck of the woods. 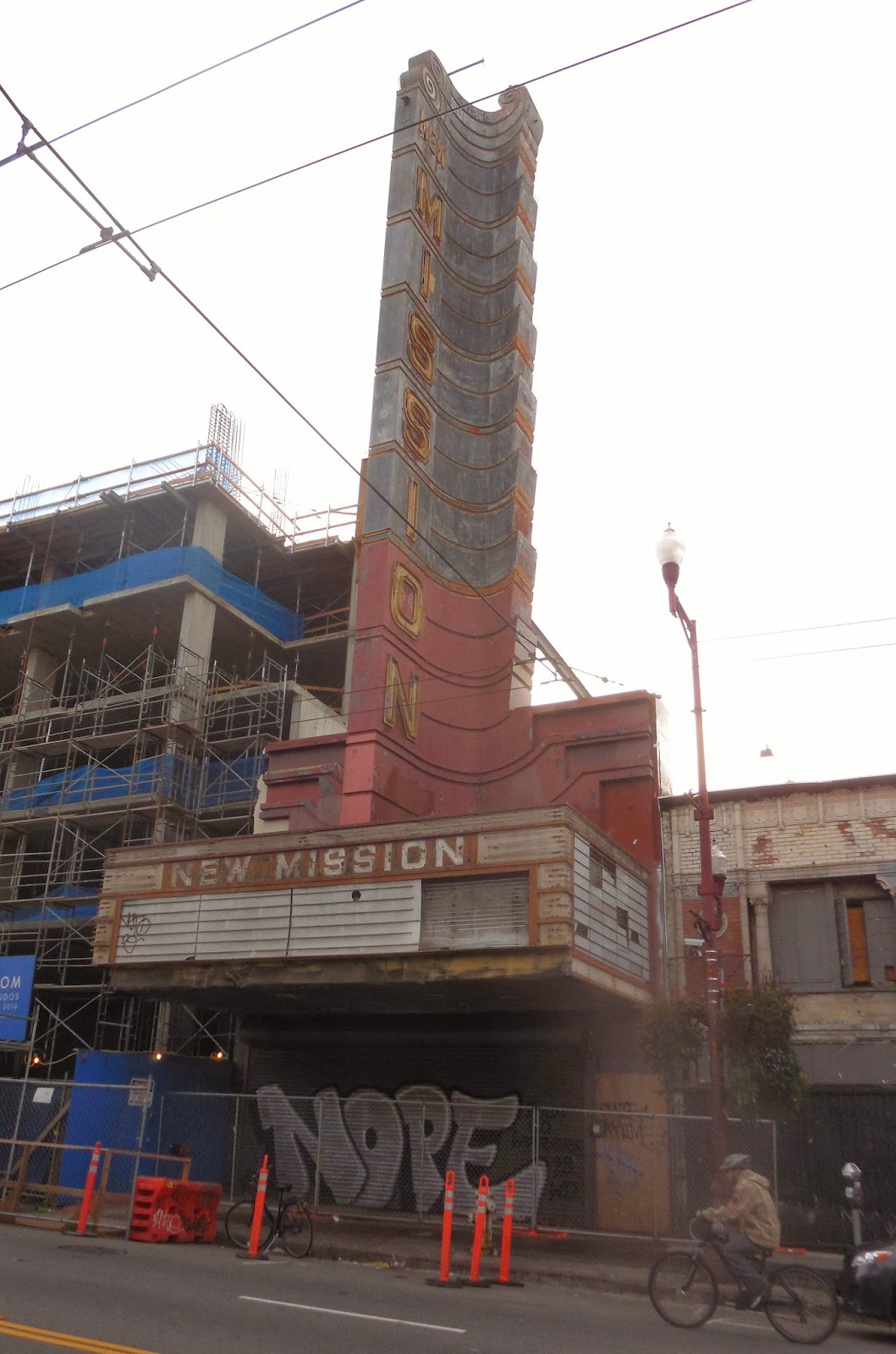 The Alamo Drafthouse company of Austin, Texas, announced in September their intentions to start a franchise here and somehow I missed this news:

Alamo Drafthouse New Mission is slated to open during the third quarter of 2014 at 2550 Mission St. in the historic New Mission theater [which] upon successfully completing the local entitlement and approval process, will feature five screens of new release movies, independent and repertory films as well as the Alamo’s unique signature programming. [...] The theaters at Alamo Drafthouse New Mission will also be equipped for 3D and 35mm projection. 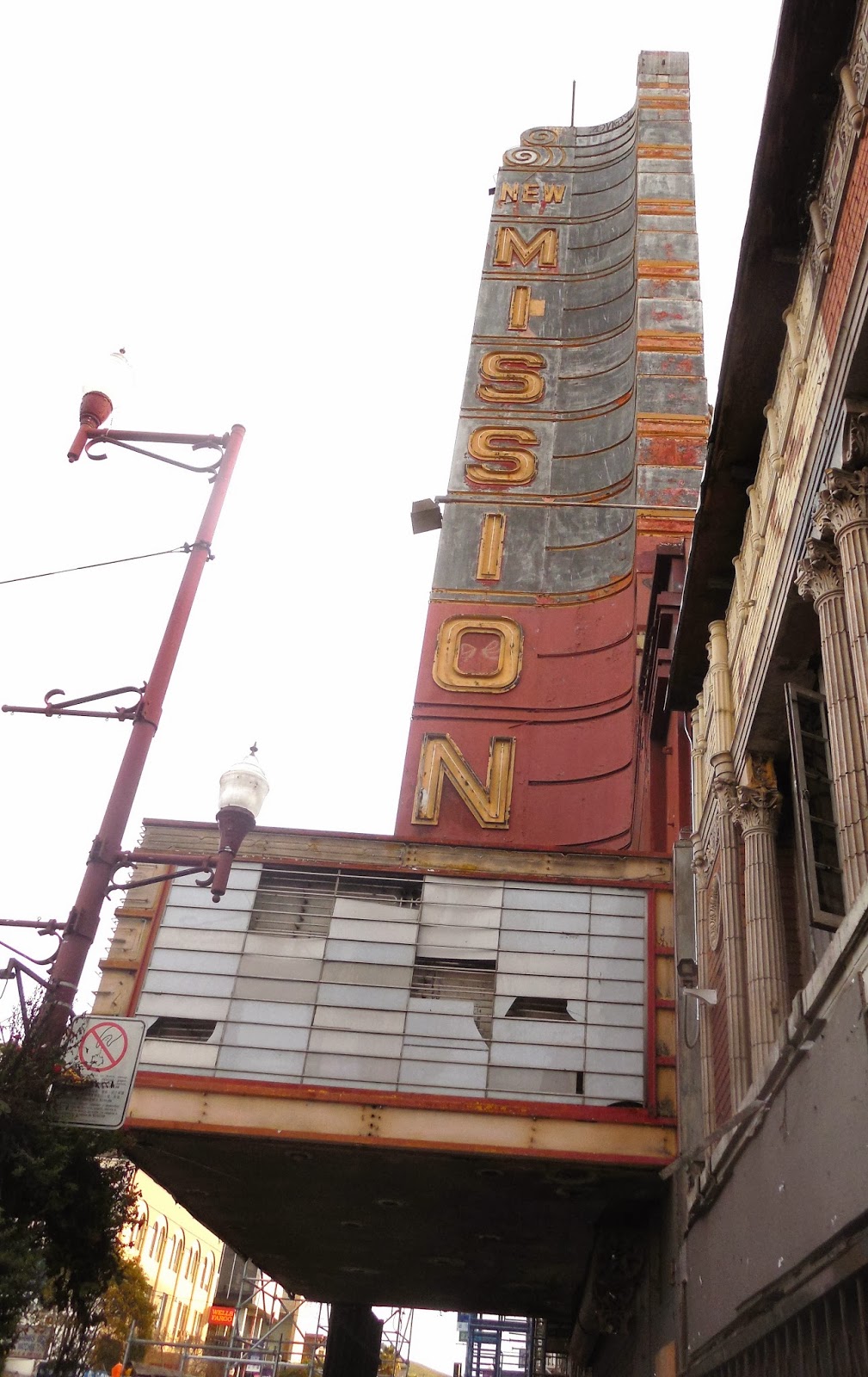 I wrote to Alamo Drafthouse's media contact Fons PR, to ask for a status report on their project and stressed the importance of communicating now with the local Mission neighborhood because this cinema company is a neighbor now and has been since they acquired the property, and spokesman Brad Johnson replied:

We are not participating in interviews in regards to the San Fran theater at this time.  I'll add you to our San Fran press list so that when we begin to make formal updates on the theater we can be sure to cc you and you can follow-up for an interview request at that time.

Color soooooo over PR mavens who engage in spin and avoid respectful engagement of substance with affected communities and persons. Brad Johnson is in league with Mayor Ed Lee's communications staff and Alex Tourk of Ron Conway's nonprofit advocacy group sf.citi, when I come looking for public documents and info. The last thing these folks do is actual relations with the public.

Memo to Alamo and their PR firm: Check the news for stories about fed up San Francisco residents demanding communication and engagement with various firms moving into our neighborhoods, in one way or another, and shifting a host of local dynamics affecting lots of people. In short, Alamo and their Austin crew ought to start a public dialogue with Mission citizens now and not wait until they open to hear from us.

Next I contacted the San Francisco planning commission for the latest details on permits and actual rehab work at the site. Richard Sucre, one of their preservationi technical specialists, responded:

I was the assigned planner for the entitlements associated with the New Mission Theater and the Alamo Drafthouse Project. Currently, this project has already been approved by the Historic Preservation Commission in December 2012, and the Planning Commission in January 2013.

They are currently seeking their building permits and will soon be under construction. Alamo is still in process with obtaining their main building permit (BPA No. 201306200106) for the theater rehabilitation. I signed off on this permit in Dec 2013, and routed it to DBI.

Last I checked, DBI was still in process with reviewing their permit submittal.

Let's hope Sucre is correct about the work soon starting and we also see Alamo executives and the public relations folks, all based in Austin, holding an open meeting or two in San Francisco.

(All photos of the facade snapped today, Feb. 12th.)
Posted by Unknown at 9:41 PM
Email ThisBlogThis!Share to TwitterShare to FacebookShare to Pinterest