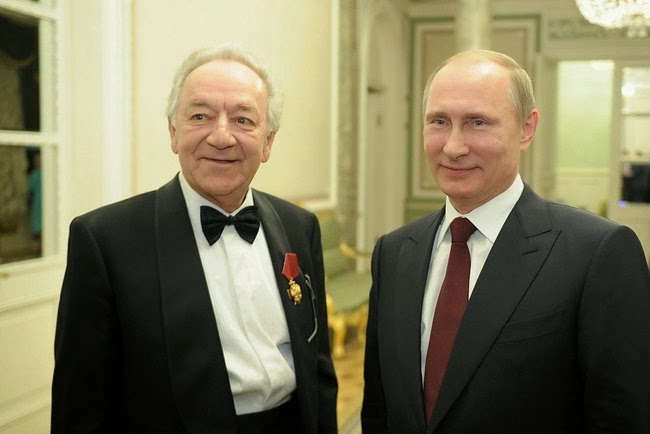 (On his 75th birthday, conductor Temirkanov was feted by his friend Vladimir Putin in December 2013. Credit: Kremlin Information Service.)

In recent days, I've emailed many people at the St. Petersburg Philharmonic and their U.S. management company Opus 3 Artists, informing them that members of Gays Without Borders and feminists are holding a solidarity rally outside Davies Hall on Monday, March 3 at 7 pm when the Russian orchestra is performing. Unfortunately, no one has responded to my request for a pro-LGBT and pro-Pussy Riot statement from the philharmonic.

Here's the link to the Facebook event page for the rally.

Earlier today, the San Francisco Chronicle's classical music critic Joshua Kosman called me in response to receiving a copy of the notes sent to the musicians and their tour organizers. He's now posted a terrific piece to the paper's web site and I hope it prods the Opus 3 Artists reps for the philharmonic to respond to my letter and take a clear stand for respecting the human rights of LGBT people in Russia and free expression for Pussy Riot.

The upcoming San Francisco appearances by the St. Petersburg Philharmonic – who are slated to play concerts in Davies Symphony Hall on Sunday and Monday nights under longtime music director Yuri Temirkanov – may become the focus for protests against the treatment of LGBT people and the state of human rights in Vladimir Putin’s Russia.

Michael Petrelis, a community organizer with the group Gays Without Borders, has promised a rally outside Davies on Monday night — Sunday, after all, is Oscar night — in support of the group Pussy Riot and LGBT Russians. He also sent Temirkanov’s management a request for his views, asking whether Temirkanov “endorses full and universal human rights protections for LGBT citizens of Russia, along with repeal of the anti-propaganda laws,” and whether there are policies in place to protect gay members of the orchestra. [...]

Witnesses from elsewhere on the Philharmonic’s current tour report no incidents, but San Francisco may be different.

“This conductor endorsed Putin, and now he’s coming to San Francisco, the gayest city in the world?” said Petrelis. “You know we’ll have something to say about that.”

Temirkanov, meanwhile, is hardly a model of enlightenment on other matters related to gender and sexuality. In October, the New Yorker’s Alex Ross reported on an interview Temirkanov had given to a Russian paper in which he suggested that female conductors run counter to nature. “The essence of the conductor’s profession is strength,” he said. “The essence of a woman is weakness.”

Posted by Unknown at 9:44 AM
Email ThisBlogThis!Share to TwitterShare to FacebookShare to Pinterest