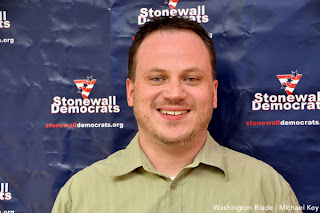 Let's give props to Jerame Davis, pictured, the executive director of the Stonewall Democrats, for his frankness about the financial trouble facing his group. In early December Davis wrote:

[We've] sent an email to [our] members and supporters detailing a more than $30,000 budget gap for the year and the danger that the deficit may force the organization to close its doors . . . For the second year in a row, our income has not met expectations. In 2011, we were able to offset the downturn by cutting costs - staff, services, programs; we cut everything to the bare essentials. We saw an uptick in funding at the beginning of 2012 as our renewed messaging and mission focus invigorated new and former donors . . . As the year closes, we're facing a budget deficit of over $30,000 and if we do not bridge this gap, we will likely be forced to close our doors.

Compare the honesty and transparency of the Stonewall Democrats with the evasiveness and murkiness of the National Association of People With AIDS and the Native American AIDS Project, before they went out of business.

Considering we have the Human Rights Campaign serving for decades as the LGBT wing of the Democratic Party, which has embedded gays throughout its national and local components, what's the point of the Stonewall Democrats' existence now? With a $30,000 hole to cover, donors have clearly diverted their dollars away from the Stonewall Democrats.

As we near the three-month mark since Davis wrote his plea, there's been no follow up posted at his site. The last update from one of the Stonewall Democrats' chapters was in May 2011, which is more recent than the group's last blog post back in January 2011.

If the Stonewall Democrats are still alive and functioning, their web site doesn't reflect it. I suggest whatever is left of the organization be folded into HRC.
Posted by Unknown at 9:08 AM
Email ThisBlogThis!Share to TwitterShare to FacebookShare to Pinterest