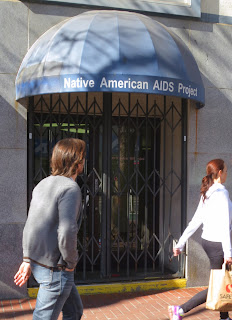 The Bay Area Reporter's Tom Kilduff in December wrote about the demise of the Native American AIDS Project that month, and the story seems to never have crossed the radar of the gay and AIDS press and blogosphere, probably because the story ran between the Christmas and New Year's holiday. Appearing any other time of the year, I believe the collapse of the group would have received additional attention.

In light of the recent bankruptcy of the National Association of People With AIDS, and the widespread coverage generated when it announced it was going out of business, we need to focus our sights on Native American organization.

An internal budget document, [from the organization], shows that NAAP had an ending net income of $11,682.62 after all revenue and expenses were accounted for. The organization, founded in 1994, was located at 1540 Market Street and specialized in culturally appropriate services for Native American and indigenous populations who are HIV-positive . . . NAAP received the bulk of its funding from two branches of the Department of Public Health: $125,000 from HIV prevention and $102,000 from HIV health services . . . The agency served 43 clients in its prevention program, the number of clients on the medical side was not known at press time . . . NAAP had fallen behind on paying the rent . . . The landlord had posted an unlawful detainer (eviction) notice.

This past weekend, I rode past the organization's former location on Market Street near Van Ness Avenue and noticed the awning was still up. So was a metal gate across the entrance. I snapped the above photo of the awning and fence.

The inside of the storefront office contained a beat up gray carpet, some plastic wires and stray pieces of metal on the floor. The glare of the sunlight and fluorescent lights inside the office prevented my camera from capturing an image showing the empty space.

NAPWA and the Native American AIDS Project. Two troubled HIV organizations now closed. Are there other such organizations, hanging on by a thread and about to go under, or running dangerous deficits? Tell will tell.

Posted by Unknown at 9:34 PM
Email ThisBlogThis!Share to TwitterShare to FacebookShare to Pinterest