Yesterday's op-ed by Bill Keller in the New York Times looked at Obamacare, corporations and religious exemptions. Keller went to Marci Hamiliton, a professor at Cardozo Law School and critic of such exemption, for her opinion and she asked this rhetorical question:

Can you deny treatment of AIDS victims because your religion disapproves of homosexuals?

Rhetoric aside, use of the term "AIDS victim" reminded me of the not-so-subtle ways stigma against people living with HIV/AIDS is reinforced by well-intentioned columnists and professors. 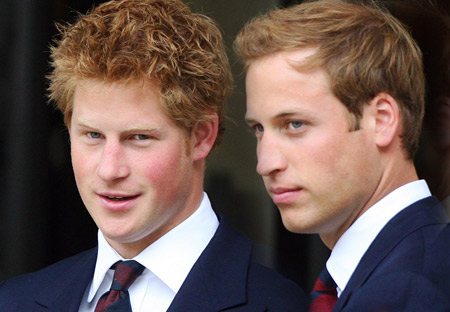 Two influential and attention-grabbing young men across the pond, however, are showing their commitment to fighting the stigmatization of PWAs. Princes William and Harry, pictured, recently shared a letter with the leading HIV prevention group in the United Kingdom, the Terrence Higgins Trust, marking the thirtieth-anniversary of its founding.

In their opening paragraph, they shine a light on AIDS stigma:

Our generation has never known a world without HIV. We have grown up knowing of the devastating impact this virus has on lives, on families, on communities. We know, too, that HIV can be treated and the lives of sufferers extended by many years. However, there is still a stigma which blights sufferers of the disease, even today.

Yes, and that stigma needs to be constantly addressed and challenged. Good of the boys to remind folks of this problem, while also shining a light on the work of the Trust and the people who carry out its mission to stop HIV transmissions and tend to the needs of PWAs.

Curious how Princes William and Harry had their representatives issue this important letter, I asked the Trust's spokesman Will Harris for more details:

In the UK, Princess Diana was a huge force for good during the early days of the HIV epidemic. During the 80s and 90s, she often visited the London Lighthouse (which was then a hospice for people with AIDS and is now one of our service centres in London) to sit with and offer comfort to patients and their families. Usually she did this anonymously, with no entourage and no cameras. On one occasion she also made a public visit, famously shaking hands with a gentleman who was living with HIV. As you can imagine, this was a huge step forward for public understanding of the virus at the time. The letter came about following conversations between ourselves and the princes’ office.

I forgot about Princess Diana's groundbreaking volunteering with and support for PWAs during the darkest days of the AIDS epidemic. Glad to be reminded of how she pitched in to help, when too many celebrities and world leaders didn't give a damn, and to see her sons carrying on her charity work.

We need more people, from high-profile newsmakers to ordinary folks, doing what they can to lessen the burdens of AIDS stigma.


Posted by Unknown at 4:13 PM
Email ThisBlogThis!Share to TwitterShare to FacebookShare to Pinterest