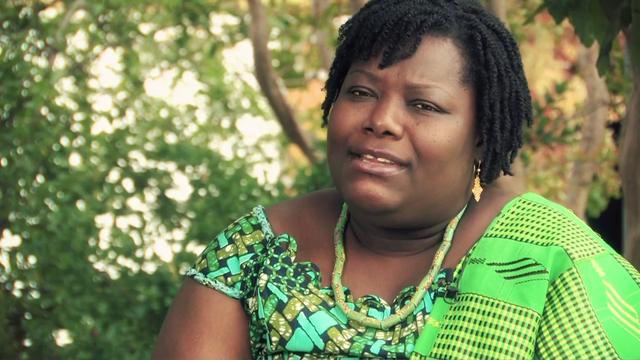 There is good news to share today from the African nation of Ghana, for the advancement of respect for the human rights for the country's gay citizens. Ghanian law forbids same-sex male relations but may not prohibit lesbian relations.

Longtime human rights advocate and lawyer Nana Oye Lithur, pictured, who is the executive director of the Human Rights Advocacy Center in the capitol Accra, after a contentious committee hearing in parliament this week received a majority vote of approval to become the Minister of Gender, Children and Social Protection. She was nominated by President President John Dramani Mahama.

From a story posted yesterday at the Ghana Web site, we learn:

[Lithur's nomination] has been met with stiff opposition by the clergy in the country accusing her of endorsing gay rights and is likely to use her office to influence President Mahama to change Ghana's stance on homosexuality.

Even though she told the vetting committee on Wednesday that she would not promote homosexuality but protect their human rights, many have interpreted her statements to mean that she is in support for homosexuality.

Lithur faces more hurdles in parliament before she is hopefully confirmed, and her testimony before the appointments committee was heavily focused on homosexuality and lesbianism leading to much public debate, not all of it intelligent.

While Lithur is not waving the rainbow flag as we Westerners would like, I believe by Ghanian standards comments such as this made by her during the vetting process can be interpreted as pro-gay. She certainly seems to be playing by Ghanian rules and leaving herself all the wiggle room she'll need, if and when she's confirmed:

If she stands for justice for all and states publicly that the rights of gay are to be honored, that's pro-gay enough for me. It must also be noted that her human rights organization last August organized and hosted an LGBT Rights Workshop, and this was the focus:

As part of an advocacy and empowerment on LGBT rights initiative aimed to empower members of the LGBT community to enforce their rights by arming them with information and strategies for rights protection.

Let's hope Lithur is eventually confirmed to head up the Ministry of Gender, Children and Social Protection, and can continue to lead a national discussion in Ghana about gay people and human rights, in addition to working for the betterment of women and children.
Posted by Unknown at 1:18 PM
Email ThisBlogThis!Share to TwitterShare to FacebookShare to Pinterest