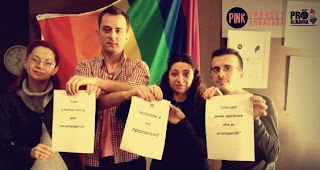 The Albanians printed signs with this Russian phrase on it, "Я человек а не пропаганд", and the same words in English, "I am a human being and not propaganda", and for good measure also translated the words into Albanian. I very much like how their hands overlap as they collectively hold up the signs.

The leaders stood in front of a large rainbow flag, placed signs of the Pink Embassy and LGBT Pro Albania on the wall behind them, then took a photo of themselves showing solidarity with the gay community of Russia holding the signs in three languages.

Next, the Albanians emailed the photo to this address, yanepropagnda@gmail.com, and soon the photo was posted here, Coming Out's page for this important online campaign.

Please follow the example of the Albanian LGBT leaders and create photos of you and your friends holding signs in Russian and/or English, or another language, then share the images with our friends in Russia.

Now is the time to show global LGBT solidarity with the Russian gay community.
Posted by Unknown at 11:11 PM
Email ThisBlogThis!Share to TwitterShare to FacebookShare to Pinterest