(At the 11:20 mark, Ruto is asked about same-sex marriage and begins his offensive comments.)

Who in the world could Kenyan politician William Ruto turn to and acquire a portion of his deranged stupidity about gay people? Evidence readily points to one source: an American politician and 2012 failed Republican candidate for president, Rick Santorum, who once equated gays with "man on dog" sexual relations. Of course, Ruto and Santorum are mighty capable of devising new slander about LGBT folks all on their own.

On Valentine's Day during a live televised debate in Nairobi, gays were wildly portrayed with great inaccuracy. Journalist and gay advocate Colin Stewart provides some of the facts:

“Careless utterances by politicians can cause a world of harm to innocent citizenry,” replied a press release from the Gay and Lesbian Coalition of Kenya, the National Gay and Lesbian Human Rights Commission, and Identity Kenya.


“There should not be grey areas when it comes to the killing of the child. Abortion is unconstitutional,” said Mr Ruto . . . Abortion largely informed the ‘NO’ side that opposed adoption of the new constitution in 2010 and Mr Ruto, who was the leading figure, said his thoughts had not changed on the issue. He compared same sex relationships to prostitution and that they "needs to be dealt with.”

Ruto and his ignorance would be very at home in the Republican Party here in the United States. Homophobia knows no borders. 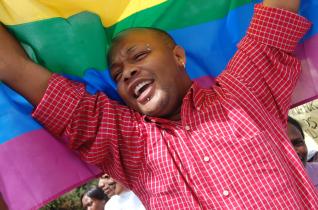 Stirring the pot as it needs to be, from an activist perspective, is the courageous out gay Denis Nzioka, pictured, who is in his mid 20s and has an impressive resume. According to the Daily Post he's written to the top of the ticket of Ruto's party:

"Dear Mr Uhuru Kenyatta, personally, I was a firm supporter of your candidature and portfolio but that has considerably changed since yesterday night when your running mate, Mr William Ruto equated homosexuals to dogs at the Deputy President’s debate,” Nzioka said. Nzioka said . . . it will be a big blow for Jubilee Coalition to lose a bloc vote of 2 million votes.

Good for Nzioka writing such upright letter threatening the loss of votes and speaking the language a politician understands, all in the name of dignity and justice for LGBT people in Kenya. I've seen a few stories tonight from Kenya mentioning Nzioka's letter and I salute his public advocacy.

Wishing him and the Kenyan LGBT community all the best in obtaining an apology from Ruto.
Posted by Unknown at 11:42 PM
Email ThisBlogThis!Share to TwitterShare to FacebookShare to Pinterest