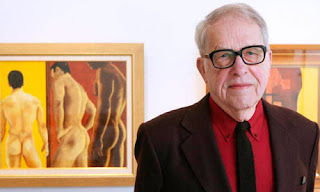 (Richie in 2007 at a gallery exhibition of his paintings. Credit: Bloomberg/Getty.)

My appreciation and understanding of the films made by Japanese director Kenji Mizoguchi, especially "Sisters of the Gion", "Ugetsu" and "The Life of Oharu", was deepened by reading Donald Richie's writings on the Japanese film industry. Richie spent decades in Japan analyzing and explaining the country and its cinema to Westerners. He passed away on February 19 and his obituary in the New York Times disclosed a very interesting fact that was news to me:

Openly bisexual, Mr. Richie also wrote frankly about his lovers, both male and female, saying Japan’s greater tolerance of homosexuality in the 1940s, relative to that in the United States, was one reason he returned to the country after graduating from Columbia University in 1953 . . . Donald Richie was born in Lima, Ohio, on April 17, 1924, and lived most of his life alone, though he was briefly married to Mary Richie, an American writer.

There's a decent amount of relevant information and reporting on the web regarding Richie's basic openness about his same-sex interests, something I don't recall coming across when reading his essays on Japanese films. I suspect others were also unaware of his bisexuality until the Times obit came out. Indeed, Richie's Wiki entry was bereft of this fact until this week when the entry was updated to include the Times' reporting on his bisexuality.

Japan, and the film world, have lost a valuable friend.
Posted by Unknown at 12:50 PM
Email ThisBlogThis!Share to TwitterShare to FacebookShare to Pinterest

Ritchie was never "in." A number of years back he wrote and directed a gay featurette.

In years past the NYT wouldnever have mentioned his bisexuality.

Actaully he was a lot gayer than bi according to my Japanese pals.

Ozu was gay too you know.

jmh said...
This comment has been removed by a blog administrator.
12:44 PM