I have much anticipation for a satisfying festival experience and will blog on films before and sometimes after seeing them. Do your part to support cinema and the San Francisco Film Society, and see a few movies between now and May 8th at the festival.

My hope is to catch the new Corneliu Porumboiu work this afternoon, "When Evening Falls on Bucharest or Metabolism", because his two previous features so intellectually stimulating and the Romanian New Wave continues a streak of excellence. 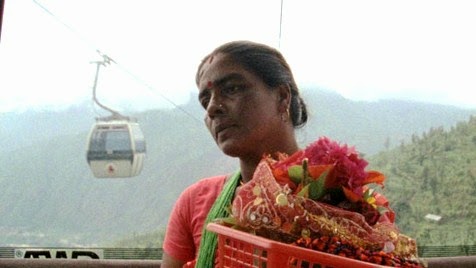 After that there is "Manakamana", described thus in the program notes: "High on a ridgeline in the heart of the Nepalese foothills lies 'Manakamana', a Hindu pilgrimage site once accessed only by a winding mountain footpath. Today, the sacred temple is more easily reached via cable car. This gondola's interior is the unlikely setting of Stephanie Spray and Pacho Velez's carefully crafted observational documentary. Embedding themselves and their ever-watchful 16mm film camera inside the cable car, the filmmakers patiently record passengers' journeys up and down the steep hillside."

The film opened commercially last week and received a glowing review from the New York Times. I'm a sucker for such films with fixed camera positions, long takes observing people and location and a "watch the paint dry" approach.

And if I have the energy and a ticket is available, I'd like to close out my first day of the festival watching "Tip Top" from France and starring one of the world's best actresses Isabelle Huppert. The program notes say it a cross between a police procedural, screwball comedy and social satire, three genres the French handle very well. The director is Serge Bozon who delighted SFIFF audiences in 2008 with his "La France" World War I drama with songs, which should have been a disaster but instead pushed a few cinematic boundaries and delivered a terrific ending.

(All photos courtesy of the San Francisco Film Society.)
Posted by Unknown at 12:42 PM
Email ThisBlogThis!Share to TwitterShare to FacebookShare to Pinterest