There is minimal reason for me to take current or former editors of and writers at the Bay Guardian, because of their longstanding disdain for myself and my advocacy. 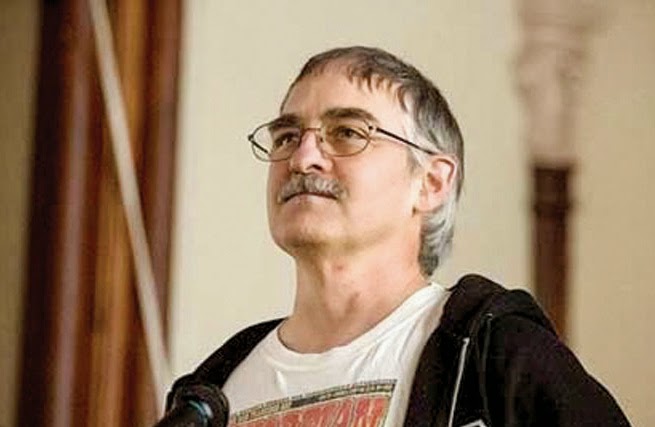 Prime example. Last April, before editor Tim Redmond, pictured, was fired, he penned a column about elected officials and their junkets on taxpayer money. He dismissed my criticism that City Attorney Dennis Herrera and the eight staffers who accompanied him to Washington for the Supreme Court's hearing on gay marriage, where Herrera wasn't needed because Ted Olson and David Boies were the chief litigants to answer the justices questions, misused City funds.

Redmond had no interest in determining how much money was spent to provide Herrera with a few media interviews raising his national profile, but the SF Chronicle did and the daily's interest in this matter was piqued by my blogging.

Occasionally, Redmond emails me fishing expeditions questions. Last spring, he was curious about the District 8 Supervisor threatening the budget of the Human Rights Commission because it might hold a town hall meeting about the Harvey Milk Plaza rainbow flag that used to belong to the public. He was trying to get in touch with the commissioner pushing the meeting with no luck, and I recommended Redmond contact the commission. Nothing ever came of it on Redmond's part.

To be fair, I expected not only the Guardian but other media outlets to show a smidgen of concern and coverage over a Supervisor jeopardizing a human rights panel's budget because they wanted to do their job, but I was wrong in that assumption. Just one more instance of lack of accountability media reporting in this town.

By the way, the commission dropped all interest the rainbow flag and public property controversy after the budgetary threats were made by the Supervisor.

Earlier this year, Redmond wanted to know what became of my requests to members of the Board of Supervisors for their December calenders, and my campaign to have them voluntarily post monthly calenders on their City-funded sites. Neither Redmond nor the Bay Guardian have pressed their progressive allies on the Board to disclose their calenders, nor have they pushed to have City department heads like Herrera and DA George Gascon post their calenders online along with their monthly expense and travel reports.

For more than a year, I've argued for this sort of easy expansion of government transparency that would be of minuscule cost to the City and you would think the progressive would have similar interests but you'd be very wrong.

In January, Redmond analyzed the state of the District 8 race:

[The] battle for D8, an overwhelmingly renter district, that focuses on tenant issues could leave room for a candidate running to Wiener’s left to mount a serious challenge. [...] But there are plenty of other possible candidates – and the one I am hearing the most about these days is David Waggoner. Waggoner, a public-interest lawyer who has represented numerous clients before the city’s Ethics Commission [...] is a former president of the Harvey Milk LGBT Club.

He’s experienced, articulate, and would have broad support in the progressive community. He hasn’t filed for the office yet, but I’d be surprised if he doesn't jump into the race in the next couple of weeks.

For guy who supposedly represented alternative political thinking when editing the Guarding, Redmond is quite square in his tired analysis and only interested in what he calls "serious" campaigns. He completely overlooks the importance and value of protest candidacies. Given how the November 2013 races for City Attorney, Assessor and Treasurer saw no serious challengers and not a single protest opponent in those three races, it would great to have a leading progressive writer get behind various candidacies.

Regarding Waggoner, a good man and decent activist, entering the race, well, he has not done so and there is no indication that he will.

This week, Redmond emailed me: I see you took out statement of intent papers; are you going to make a serious run against Scott in the fall?

There he goes again with that serious word! After he published his column, I replied it took him to notice four months after pulling papers at the Department of Election, and generating coverage in the Bay Area Reporter, POZ magazine, the SF Chronicle and the SF Weekly along with a robust smattering of attention from local blogs, that I was organizing to run.

When Redmond asks about a serious run, what he means is will I be seeking to kiss his Progressive Pope ring and solicit the endorsement of the usual progressive suspects at the Guardian, the Milk Club and public workers' unions, in short the local progressive machine.

My effort is a serious protest candidacy and frankly, I hope we see a few more such candidacies in all San Francisco political races. Here's what Redmond wrote this week:

There’s been plenty of talk about a challenge to Sup. Scott Wiener in D8, but Wiener’s got $150,000 on hand and nobody from the progressive side has come forward. At this point, it may be too late.

Proof of his narrow definition of progressive. If you depended only on factual reporting from this dude regarding the District 8 race, and a whole bunch of other matters, you'd not get the full picture. He's simply not a, um, serious reporter.

Considering not one of the three Supervisorial candidates endorsed by Redmond and the Guardian in 2010 won, only one of their three favorites for City-wide offices in 2011 was successful, their choices for District 5 Supervisor lost in 2012, and that the paper gave a kiss-of-death blessing in a gushing cover story last February to a revived ACT UP chapter that has unfortunately dissolved except for a Facebook page, I have some advice for the current Guardian staff and Redmond.

Posted by Unknown at 10:36 AM
Email ThisBlogThis!Share to TwitterShare to FacebookShare to Pinterest