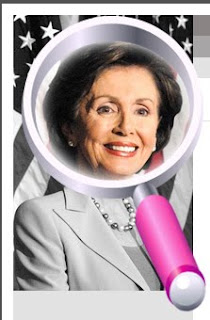 Who Killed 'Pelosi Watch'?
The Roxie theater in San Francisco's Mission District was the location for a standing-room-only town hall meeting in December 2006, with Ralph Nader as the keynote speaker. Leading progressive and liberal activists gathered to discuss the best ways to persuade our Congresswoman, Nancy Pelosi, to better represent the interests of her district.

Many of us in attendance had been trying for years to get Pelosi to address local voters' wishes for her to aggressively oppose Bush and Cheney's foreign wars, and to push for Congressional action on gay issues. We were ravenous for an organized, multi-cultural and multi-purpose accountability effort involving Pelosi, especially she would be elevated to the Speaker of the House position.

A sign-up sheet was circulated for Pelosi Watch by Medea Benjamin, founder and leader of Global Exchange and Code Pink, pro-peace organizations frequently in the news for their creative disruptions of government hearings. Benjamin is often derided for her massive ego and ceaseless desire for press attention, to the point where some activists have nicknamed her "Me-Me-Media" Benjamin.

Benjamin and her Code Pink colleagues soon set up a listserv and web site for Pelosi Watch, and on their own, without holding single meeting, decided how things would operate. The folks at Code Pink said decisions would be made by them on how best to organize, and everyone who added their names and emails to the sign-up sheet were supposed to just follow Code Pink leaders' decrees.

Several folks on the listserv in early 2007 asked when Pelosi Watch would hold some meetings, bring everyone together to organize and strategize, and put forward an accountability agenda involving our U.S. Representative. We were told a meeting could not be held until important speakers were lined up to lecture the rest of us. In short, Pelosi Watch was to be run by a small clique with a top-down mentality.

Along with many others, I got off the listserv because Pelosi Watch was not going to be the grassroots-driven watchdog effort we wanted it to be. We were just not the least bit interested in serving as a fan base for Benjamin and her pals, being lectured at, and not allowed a real voice in setting the agenda.

According to the dormant Pelosi Watch web site, Benjamin and her buddies did hold a lecture in February 2007, and nothing is reported about how many activists attended, what proposals were made, or what actions would be taken.

However, there is a long report on what one lecturer said, which probably boosted his ego, but did nothing to engage activists. That appears to be the only such public meeting Pelosi Watch attempted. The last update of any sort from Pelosi Watch was back in October 2007.

Who killed Pelosi Watch? Benjamin and her followers in Code Pink. They squandered the deep interest across many San Francisco constituencies, after Pelosi was elected Speaker of the House, to hold her accountable to local voters.

With Benjamin leading a grassroots campaign to hold Pelosi accountable, maybe make the Speaker more responsive to constituents' needs, Pelosi had nothing to worry about. If a new Pelosi watchdog effort is ever attempted again, let's hope Benjamin and her colleagues are not in key positions. 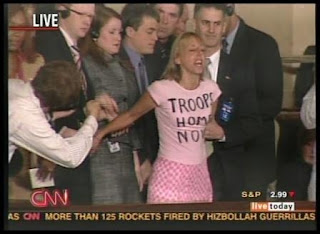 (Me-Me-Media Benjamin, Code Pink founder.)
Posted by Unknown at 10:03 AM
Email ThisBlogThis!Share to TwitterShare to FacebookShare to Pinterest