Survey: High Tolerance for Gays
in Latin/Carib American Politics
Over at the Americas Quarterly blog, Mitchell Seligson, a political science professor who conducted some very thought-provoking findings about gay acceptance south of our borders, caught my attention with an excerpt from an on the surveys he conducted, and this graphic: 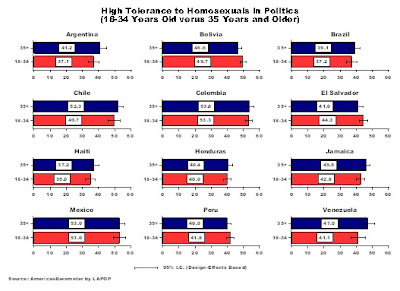 I wish the graphic from the Americas Quarterly were crisper, but I hope you can make out that the top blue bar is for people above 35-years-of age, and the red bar is for 18-to-34-year-olds.

What I found startling was that for Jamaica, one of the region's most homo-hating countries, in both age brackets, the level of tolerance for gays in politics was above the low single-digits. Where the hell did Seligson's surveyors find enough Jamaicans to say that more than 40 percent would tolerate gays in the political sphere? Sure would be fantastic if those folks surveyed could speak out for acceptance of gay people in Jamaica.

That aside, Seligson places the Jamaican numbers up against what he found in Latin America:

The new found momentum for allowing homosexuals to openly serve in the U.S. military springs from attitudinal changes that have taken place since the “don’t ask don’t tell” policy of 17 years ago. If only this type of generational change were occurring south of our own borders. Recent surveys demonstrate that levels of political tolerance of gay rights in Latin America have changed little across generations.

The most basic measure of tolerance is that of citizens to accept the right of a citizen (in this case a homosexual) to run for political office. Sadly, even by this basic measure of tolerance, younger generations in Latin America are only marginally more supportive of political gay rights, especially in the most notoriously intolerant environments for homosexuals, Jamaica and Haiti.

Unfortunately these sad trends look unlikely to change. The greatest predictor of tolerance toward the political rights of gays in Latin America--as throughout the world--is education. But educational levels are slowly rising throughout the Americas south of the Rio Grande. [...]

To read all of Seligson's post, you have to sign up for a trial offer with the Americas Quarterly. Sorry, but I don't sign up to read any full blog post. Either post the entire piece, or you won't find me signing or registering for anything just to read the piece. Nice of them to share the terrific graphic though.
Posted by Unknown at 9:30 PM
Email ThisBlogThis!Share to TwitterShare to FacebookShare to Pinterest