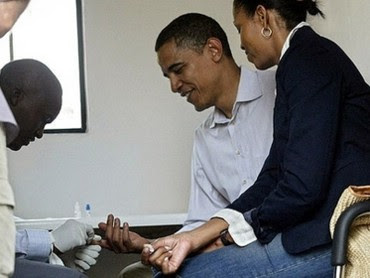 In yesterday's New York Times story about President Barack Obama's recent medical checkup, quite a bit of info was shared about his tests and results:

Other standard blood tests showed no evidence of diabetes, heart and metabolic disease. They included triglycerides, 46; high density lipoprotein, 62; and low density lipoprotein (so-called bad cholesterol), 138. These compared to 44, 68 and 96 in 2007.


The Times omitted any reference to the President getting an HIV test, so I asked the White House press office a few questions regarding whether he took another such test. No answers were returned, but the White House did share a few related links, including this one to the PDF of the report from the President's physician. That report mentioned nothing about an HIV test.

When he was still in the U.S. Senate, Obama and his wife Michelle were tested for HIV during a visit to Kenya. This very public test-taking was widely reported on, and, I believe, did much to lessen stigma associated with taking the test. The AP reported on this in an August 27, 2006, wire story:

The Illinois Democrat began his day with an appearance at a hospital in Kisumu, Kenya's third-largest city. Thousands of people waited for him, even climbing trees for better views, as he visited a mobile HIV-testing center.

Obama and his wife, Michelle, entered the mobile lab and underwent HIV tests in an effort to reduce the public stigma associated with testing in Kenya. He said the results were good news but the most important thing was the control that comes with knowing their HIV status.


At that time, the Centers for Disease Control and Prevention called for routine HIV testing, in a public health campaign to find and treat positive persons, among other outcomes. IMHO, great benefits in Africa and America were gained when the Obamas made a terrific high-profile event out of taking the test.

But here it is four years later, Obama is the Commander-in-Chief, he gets his annual checkup, the White House says nothing about whether he took another HIV test, and the nation's leading paper omits the matter.

I don't want to violate the President's medical privacy in any fashion, but I think the country should know if an HIV was taken, and the results kept private. If the White House would share that info, and the Times and other media would report on it, HIV testing stigma would be reduced, and pro-testing message would get out to the public.

By the way, he took a second HIV test in 2006, on World AIDS Day, December 1, at the Rev. Rick Warren's Saddleback mega-church, and the cameras were there to record the event: 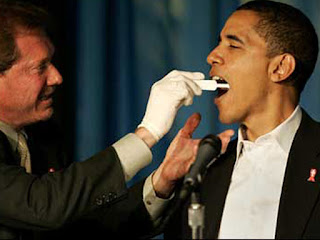 Did Obama have an HIV test this year?
Posted by Unknown at 1:18 PM
Email ThisBlogThis!Share to TwitterShare to FacebookShare to Pinterest