IRS: HRC's Solmonese Flies First-Class
About a year ago, at the old Washington Blade, longtime reporter Lou Chibbaro presented the community with a gift of a story. It was a salary survey of our gay and AIDS orgs' executive directors. Thanks to the truly fabulous HIV site Aegis, that survey is still available online for folks to read.

Lou noted that according to the Human Rights Campaign, Joe Solmonese "took a voluntary pay cut of 10 percent, lowering his total compensation from $338,400 to $302,200, according to HRC," for 2009. Nice of him to sacrifice a small amount for the good of the movement.

What is of equally keen interest is this explanation that sheds a healthy ray of sunshine into the professional life of our Dear Leader, on page 29:

Gosh, it must be so difficult, having to make travel plans to be in LA walking the red carpet for an HRC "L Word" party, instead of trying to influence the New Hampshire primary: 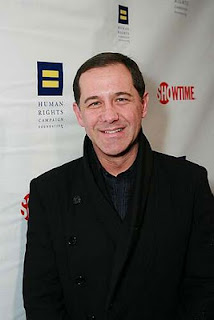 Or getting to the Sundance film-apalooza to schmooze with indie, creative types:

Or appearing at the HRC dinner in New York City and doing a great impersonation of a wax figure: 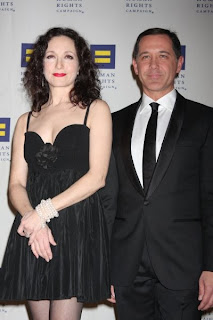 Or schlepping back to Washington and getting pimped up for a society photo-shoot:


Snark aside, I would not give a fig if Solmonese always traveled in first class and even made half a million in annual pay, if I thought he were genuinely working round-the-clock to advance federal equality for gays and that his leadership of the community, and stewardship of HRC's budget, was accomplishing clear-cut results.

But he and his org are the biggest leeches to affix themselves to the gay community's hide, and they ain't about to give up their lucrative salaries and benefits and really deliver federal changes for the rest of us.

The HRC's IRS 990 report, on page 7, shares this info on what other executives at the org made last year:

A solid $2.1 million to pay just 14 leaders at HRC, and the average for those salaries comes to $156,000. What do we get in return for paying these leaders such good compensation, to work on our equality and federal issues? 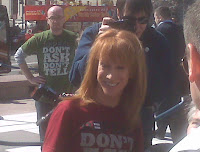 HRC's Dear Leader and his minions gave us another in a long line of minor female celebrities brought to DC to appear in a photo-op promoting their equal logo, and the comics use gays to generate interest in their careers or latest entertainment product.

It's insulting that 17 long years after Bill Clinton created the Don't Ask/Don't Tell ban on gays in the military, and hundred and hundreds of gay dollars wasted through HRC since then, we get to this pivotal moment to potentially overturn the ban, and the best HRC can do is give us a straight chick looking for laughs.

The longer HRC exists and maintains its reputation as the Worst.Human.Rights.Organization.Ever., the longer the joke is at our collective expense.
Posted by Unknown at 2:40 PM
Email ThisBlogThis!Share to TwitterShare to FacebookShare to Pinterest

Michael, thank you. Really. Thank you.

What I find astonishing is that HRC is surprised that the community is angry with them...ever. From the non-aggressive approach they take to securing even minimal progress to the whole Lt. Dan Choi debacle, HRC has demonstrated an unwillingness to take risks on our behalf.

It is clearly time to force HRC to reduce salaries by making sure that we take our money elsewhere. Maybe even to some place where it will do some good on behalf of the community rather than to allow Solmonese to fly first class from cocktail party to cocktail party.

You are my HERO!

It's time to DEMAND Joe's resignation along with the ENTIRE Board and get REAL Activist/Advocates in the HRC. It's eeither that or make an all out attempt to KILL the org.

thanks for the comments, fellas. they are much appreciated. i'm just trying to bring as much sunshine as possible to everything about HRC, especially how they use the millions of gay dollars they rake in annually.

i really wish they would get assertive with the white house and congress, and stop already with the endless promoting of minor celebrities.

michal, this is revolting, that so many staff members receive so much and the organization provides so little. i have called for joe's resigning. hell, i have called for the organization itself to disband and sink into a well-deserved oblivion. what i want to know is who in this day and age of reality and transparency gives money to this useless place? they must be living on the moon not to see what isn't going on. each year they seem to rake in more and more big bucks. it's sickening. you should try and get a list of their major donors and post that!

Chance would be a fine thing.

Be pissed with them. Reform them. I don't think they are evil, they just don't do enough. They need to spend their money more wisely and grow some balls. I don't think calling for their demise is in any of our favor. Certainly they need new strategies however. Or you know you could quit bitching and join or start a new activist group.

I believe if you do more research you'll find that Joe is also paid from the HRC's sister foundation for another few hundred thousand - bringing his total compensation over $.5M -- yes, that's millions. In other words, check the tax returns for the HRC Foundation for the same period, as well.

I keep asking the apologists to name one major thing this organization, or its leaders in particuliar, have accomplish on our behalf. The sad answer is nothing.

We, the GLBTQ community, let useless Joe and the BoD speak for "us". Somehow we've abdicated our personal responsibility thinking that writing the check somehow makes us bonafide supporters of the movement.

They are an entrenched, myopic, organization and if we continue to fund them, through our donations, then we are giving them tacit support.

I'm suggesting the only way we can get new leadership and new ideas (because clearly the old ways aren't working) - then we need to support new people and new groups, new organizations.

Don't Ask, Don't Tell - AND Don't Give. We must start talking about pay for performance.

And bravo to the commenter who pointed out that Solmonese's HRC Foundation salary should be added in as well to get his total compensation figure.

"I would not give a fig if Solmonese always traveled in first class and even made half a million in annual pay, if I thought he were genuinely working round-the-clock to advance federal equality for gays and that his leadership of the community, and stewardship of HRC's budget, was accomplishing clear-cut results."

To me this is the critical point however it kinda get losts among the other stuff. While never a fan of the HRC, GLAAD and a few others, their salaries and travel budget are well within line of other National Non-profits. Sadly at the end of day, year decade they return home with nothing. As a former member of ACT-UP NY, I remember doing far more on a Subway token.