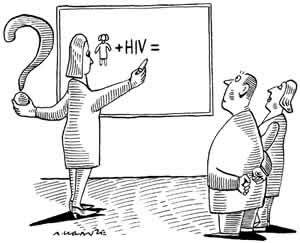 One fascinating thing Clinton dug up was an article from the April 2009 edition of The Scientist magazine, written by Virginia Hughes, that examined some of Blower's controversies. Hughes reports:

But not all scientists side with Blower's models, arguing that reality (and not just TV) is significantly more complex than what she presents in her equations.

Last July, Blower published a model showing that widespread use of vaginal microbicides [...]

Microbicide experts took issue with the model's real-world relevance. "In some way, we felt like they slightly missed the point," says Lori Heise, director of the Global Campaign for Microbicides [...]

There's definitely a pattern to Blower's work and how it's presented. She creates complex math models, processes them through dire worst case scenarios, people step forward to question the findings and their applications in reality, and few seem sure of what to do with her confusing research. It's not just microbicide advocates questioning Blower's models, but HIV and public health advocates too.

The Scientist reports further on other experts critical of her methods, professionally and personally:

"I have not felt that there was a high degree of credibility [in some of Blower's work] mainly because some of the clinical and biological underpinnings or assumptions in her work just were not particularly realistic in my view," says Ron Gray, a reproductive epidemiologist and HIV specialist at the Johns Hopkins Bloomberg School of Public Health.

Seventeen other international experts in infectious disease modeling declined to talk about Blower's research. Three cited specific unpleasant personal or professional interactions with her. (Some scientists did speak positively about her work.)

That's a high number. 17 experts unwilling to talk about her work on the record. It's a good thing such reticence does not exist in my local gay community! Bad science flourishes when so many experts refuse to publicly lay out what is wrong with Blower's modeling.

As we begin our third month of San Francisco gays, PWAs, public health advocates, gay papers and reporters,and City Hall politicians, continuing to bring sunshine to Blower's research in the UC system, I couldn't think of a better way to start this month than with Clinton's cold, hard look at Blower, and the fabulous piece in The Scientist.
Posted by Unknown at 2:08 PM
Email ThisBlogThis!Share to TwitterShare to FacebookShare to Pinterest