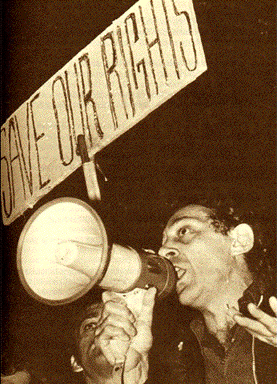 The Bay Area Reporter's Matthew Bajko wrote an excellent and balanced front-page article last Thursday about one big ego retaining sole control of an iconic piece of gay history, and it made me thankful for the good folks at the GLBT Historical Society down on Mission and 4th Streets. The society possesses and controls many Milk artifacts, and their use and preservation is in the hands of a professionally run operation. It is not held hostage to the whims of one ego.

The same cannot be said about Harvey's bullhorn. From the BAR:

Students at the Harvey Milk Civil Rights Academy took to the streets of the Castro in early March to protest painful budget cuts by both the city and the state. Led by their principal, they marched down Castro Street, chanted "save our schools," blocked traffic for a time, and held a rally at Harvey Milk Plaza.

In covering the afternoon demonstration, the Bay Area Reporter noted that rather than use the bullhorn that belonged to Milk, the slain gay rights pioneer for whom both the public plaza and elementary school are named, Principal Christina Velasco instead was banging on a drum strapped to her shoulders. [...]

"The day of the protest I got asked about it," said Velasco. "The kids asked where is Harvey's bullhorn?"

After the story appeared online, a parent from the school contacted the B.A.R. to say the reason why Velasco didn't use the bullhorn is that it has been missing for the last two years. [...]

It currently is residing in the Palm Springs home of LGBT activist and Milk confidante Cleve Jones, a consultant on the movie who is the owner of the bullhorn.

"It is in my house," Jones told the B.A.R. in a recent phone interview after the paper began inquiring about its whereabouts. "The bullhorn belongs to me and has belonged to me since Harvey gave it to me."

Jones said he is amenable to returning the bullhorn to the school, but first he is trying to have it appraised and then plans to insure it. [...]

Gosh, it's been a few decades since Cleve received this incredible gift, loaned it to the students in the Castro, and he still can't get it appraised or insured? Why is he taking his sweet ol' time? Who knows. Too bad he's not working with the historical society, or any other community org with a track record of archiving and insuring a valuable piece of our history.

Frankly, if the historical society, or the San Francisco Public Library which also houses a tremendous amount of community relics, papers and such, are not good enough for Cleve, maybe he can form a new org with the Milk school, and place the bullhorn in the possession of a circle of people.

Is it asking too much for Harvey's bullhorn to come back to the Castro and the school named for him? More from the BAR:

Until it is given to a museum someday, Jones said he feels having it back at the school "is totally appropriate." But he doubts he will be able to finalize an agreement with the school in time for the state's inaugural Harvey Milk Day this May 22, which would have been Milk's 80th birthday.

I honestly can't see any legit reason why the bullhorn can't be back with the schoolkids and our neighborhood by May 22. After all, the school and the students took damn good care of it in the years during which they were honored with the bullhorn. They surely can do so again, and in time for Harvey's birthday.
Posted by Unknown at 2:50 PM
Email ThisBlogThis!Share to TwitterShare to FacebookShare to Pinterest

Last September, when Cleve was in Chicago to speak to the Join the Impact group, he mentioned to me he had the bullhorn. I photographed him when he was 18 years old in San Francisco. In the Movie "Milk", they deleted my footnote in gay history, when they showed Harvey speaking to a crowd with the bullhorn in front of the Castro Theater, prior to the impromptu march. It was in response to Anita Bryant's lead vote to rescind a gay rights ordinance in Dade County Florida. In the movie, it depicted that march was for the Wichita defeat, that actually came 9 months later. They also showed many signs... (in reality there were just a few signs, and the march did not end at City Hall, but downtown at Union Square.
For the actual story behind the photo shown above... visit www.thecastro.net/street/ memoriespage/pritikin/scene05.html
and also take time to view the whole
web-site. Unlike the movie... it is not a recreation, but the real events of the early S.F. gay rights movement.

I suggest, if the horn is so important, we do the right and proper thing: buy it from Jones for a mutually agreeable sum. Beyond that, I suggest asking nicely if we want him to do us a favor. Rarely have I seen people react well to being castigated in public for not doing something on someone else's time schedule. Jones has a life and may not see this object as something he wants to part with so quickly.