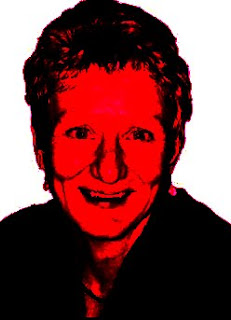 (Photo illustration of Sally Blower by Clinton Fein.)
Clinton Fein, being a gay male health writer among his many talents, has written a fabulous essay about the continuing troubles over a shoddy HIV math model created by UCLA's Sally Blower, and the importance of a recently statement from a Vice Chancellor at UCSF, putting great distance between the two campuses.

In phone chat yesterday, he said I had underplayed and obscured the full significance of the UCSF Vice Chancellor's statement, in writing about it in a piece that gave higher prominence to the Bloomberg News story about the study. Clinton, as he often is, was right. That is why I've taken a healthy chunk of his essay and have posted it here.

The campaign to hold Blower and UCLA's press office accountable for their shameful, and continuing, silence about the dozens of questions raised and the two-months of ire from many San Francisco leaders and institutions, is not going away.

What is disappearing is the excellent reputation of UCLA's medical schools and research, and by extension the entire UCLA campus. Make no mistake about this: UCLA'S headache over the HIV math model for San Francisco's HIV drug resistance will only go away when Blower and the UCLA press office respectfully and constructively engage us.

In a damning transcript released by University of California, San Francisco (UCSF), Professor Sally Blower, the besieged UCLA director of of the Disease Modeling Group at the David Geffen School of Medicine at the University of California, Los Angeles (UCLA) is exposed to have deliberately ignored concerns raised by UCSF in the first draft of a joint press release, and rewrote it, “changing both tone and substance” of the original draft. Dr. Blower had attempted to focus accountability on Enrique Rivero of UCLA Health Sciences Communications and Government Relations, headed by Executive Director Dale Triber Tate, and UCSF.

In early February, demands for an explanation and retraction from UCLA by me and activist Michael Petrelis, were sent to Dr, Blower. I suggested that UCLA follow the lead set by Barbara French, associate vice chancellor of University Relations at UCSF and UCSF's liaison for LGBT health issues, Ms. Shane Snowdon, who met with us following fallout from a MRSA study that turned into a scandal in 2008, and established a set of concrete steps to take to ensure it didn’t happen again.

A letter requesting an explanation was also sent by San Francisco Supervisor, Bevan Dufty, to which Dr. Blower responded two weeks later, in which she wrote: “We wish to stress that the press release was written by the UCLA media person for HIV and was approved by the media team at UCSF.”

Seeking clarification from UCSF, a statement by Ms. French was issued to Michael Petrelis through Ms. Snowdon.

Categorically disputing Dr. Blower’s claim, Ms. French stated that UCSF media personnel did not “have the opportunity to approve the UCLA press release.” Ms. French further stated: “When the study was circulated at UCLA and UCSF, Jeff Sheehy, Communications Director at the AIDS Research Institute at UCSF, told Enrique Rivero, the UCLA media representative for the study, that he thought it would be controversial. Rivero drafted a press release about the study that used qualifiers such as 'could' and differed significantly from the final UCLA release.”

Dr. Blower, it appears, didn’t like qualifiers that would water down the sensational and unsubstantiated claims being touted by her study.

According to Ms. French, “On receiving this draft release, Dr. Blower apparently rewrote it, changing both tone and substance.” Again, according to Ms. French, UCSF’s Mr. Sheehy warned Rivero that the rewritten release “would create problems, but the release was distributed.” Mr. Sheehy “did not have an opportunity to edit or approve the rewritten release” and considered it problematic enough that he “did not submit it to UCSF channels for distribution and did not send it to his contacts.” [...]

I recently wrote a long expose on Professor Sally Blower, who has a history of fabricating information, and falsely accusing her colleagues of sexual harassment and other damaging lies that she’s been required to retract publicly.

Fellow scientists criticize her publicly, denouncing her as unpleasant and difficult to get along with, let alone work with. Her tumultuous departure from UCSF under a cloud of lies and strong-armed tactics, designed to hurt individuals and the university, was replicated at UCLA, where incredibly, she still works. [...]

In 2005, Sir Roy Anderson, of the Department of Infectious Disease Epidemiology, Imperial College at the University of London wrote a terse letter to The Journal of Infectious Diseases, providing evidence of a mathematical model he had originally published in Nature in 1991 which was “the first transmission model of HIV vaccines to assess the potential epidemic-level impact of imperfect vaccines.”

His letter followed an attempt by Dr. Blower to discredit his claim in 2005 by falsely claiming that her 1993 and 1994 articles represented the first publication of the first transmission model related to the potential epidemic-level impact of imperfect vaccines.

While Sir Anderson has his own baggage around failures to disclose business associations, he is widely respected for his expertise. He is a is a leading British expert on epidemiology, and also currently chairs the science advisory board of WHO's Neglected Tropical Diseases program, is a member of the Bill and Melinda Gates Grand Challenges advisory board, and chairs the Schistosomiasis Control Initiative advisory board (SCI) funded by the Gates Foundation. He is a non-executive director of GlaxoSmithKline.

Dr. Sally Blower, on the other hand, has a history of lying, fabricating and then publicly having to apologize in addition to criticisms by scientists and colleagues who question the veracity of her claims and feasibility of her models. Dr. Blower deliberately eliminated the cautions and qualifiers inserted by UCSF in order to sensationalize the findings of her study. [...]

Dr. Blower further used the media opportunity to cast doubt on current HIV prevention strategies, particularly the “test and treat’’ approach being advocated by the World Health Organization, which aims to reduce high quantities of the virus being generated in an infected person to low enough levels that little to no HIV is passed along to a partner.

These actions are dangerous and deadly and impact the lives of other people. [...]

Originally I had called for an explanation, which I later changed to a demand for an apology or a retraction. In light of these new revelations and Dr. Blower’s deliberate and calculated attempt to give more credence to her findings by removing qualifiers, ignoring legitimate concerns raised by UCSF and her willingness to demonize a community in the process is reprehensible and represents a black eye to UCLA’s credibility.

UCLA needs to qualify why they continue to support Dr. Blower, or Dr. Blower should resign.

Posted by Unknown at 9:40 AM
Email ThisBlogThis!Share to TwitterShare to FacebookShare to Pinterest